Introduction. Today’s feed market offers a variety of new products of plant and animal origin that increases the productivity of young sheep. Using feed supplements can help farmers to fully realize the genetic potential of wool-and-meat genotype sheep.
Study objects and methods. We studied the effect of a whole milk replacer (skimmed powdered milk) and an ORGANIC high-protein feed supplement on the growth of young sheep and the quality of their meat. In particular, we determined the effect of starter feeds on the biochemical and morphological parameters of sheep blood at the Vtoraya Pyatiletka Breeding Farm, Stavropol Krai.
Results and discussion. Substituting starter feeds with a whole milk replacer and an ORGANIC supplement for the standard feed in the diet of sheep aged 0–4 months increased metabolic energy (by 12.5%), crude protein (by 22.4 and 25.5%, respectively), lysine (by 24.8 and 21.4%, respectively), and methionine + cystine (by 31.0%). The starter feeds also led to higher live weight (by 29.6 and 33.7% (Р ≤ 0.001)), absolute and average daily gain (by 24.6 and 29.1% (Р ≤ 0.001)), slaughter weight (by 36.5 and 42.1% (Р ≤ 0.001)), slaughter yield (by 2.50 and 2.96 abs.% (P ≤ 0.05)), and meat marbling (by 3.6 and 11.7%). The number of muscle fibers increased by 2.1 and 3.3%, respectively. Additional profits rose from 1761.5 to 2091.5 rubles per head and the product profitability reached 50.5–57.9%.
Conclusion. The starter feeds containing a milk replacer and an ORGANIC feed supplement proved effective for sheep aged of 0–4 months in the suckling period, ensuring live weight of 39–40 kg and improving meat quality and productivity.

Modern market conditions call for highly competitive sheep breeding, which requires specialized meat production of high quality. Sheep meat is the most expensive meat in developed countries. Its consumption depends on cultural factors and tends to increase with growing population and incomes. Major exporting countries see a decline in their sheep stocks caused by the shrinking wool market. Sheep meat production is expected to be developed by small and medium-sized farms close to their markets [1].

Today, there is an urgent need for highly productive young sheep and safe lamb meat of high-quality. The world demand for lamb is very high, both in nutritional and commercial terms. Therefore, lamb production is a priority in Russia and abroad [2].

Many studies have shown that lamb aged 0–7 months is the best type of sheep meat. Russia consumes 1.0 kg of lamb per capita, compared to 1.29 kg worldwide. Private farms account for 88.6–89.2% of sheep meat production in Russia [3].

Nutrition is one of the main factors of meat productivity alongside good maintenance conditions [4]. Selective breeding of farm animals is also gaining ground. It aims to produce new genotypes of wool-andmeat sheep for manufacturers of livestock products.

To fully realize the genetic potential of wool-and meat sheep genotypes, we need to improve their feeding systems by adding new supplements of plant and animal origin to enhance their productivity. Adequate nutrition is the main principle of animal feeding that contributes to higher productivity. Diets should be differentiated according to production schemes and planned productivity. Rationed feeding is one of the most important indicators of nutrition that ensures normal physiological state, high productivity, good reproductive qualities, and production profitability. Nutrition enhanced with feed supplements rich in bioactive substances is the most rational way to obtain low-cost and high-quality products [5]. Radzhabov et al. provide a good coverage of intensive sheep raising methods based on adequate feeding [6].

By-products of starch, dairy, meat, and other industries are increasingly used as feed supplements in animal diets. However, it is important to study their composition, nutritional benefits, and possible side effects for the animal organism [7, 8]. Most changes caused by feed supplements occur at an early age, during intensive growth and development of lambs. This is a period of greatest assimilation of feed nutrients leading to the maximum increase in live weight. Feed supplements improve animal productivity, activate digestive metabolic processes, and ultimately make sheep breeding cost-effective [9, 10].

The ORGANIC supplement (patented in Russia) is a high-protein feed supplement obtained from collagencontaining solid waste of leather production. It is used to enrich feed for all types of productive animals, fish, and poultry, with a highly digestible, “protected” protein. The product has stable quality indicators, namely 82–85% of crude protein and а complete composition of essential and non-essential amino acids. It facilitates digestion and gastrointestinal functioning, which improves the digestibility and absorption of feed nutrients, as well as increases the natural resistance of the animal’s body [11].

We aimed to study the effect of the ORGANIC feed supplement on the growth and development of sheep, meat productivity, and economic efficiency.

To achieve the aim, we set a number of objectives, namely to:

Diets for young sheep were determined by such factors as age, live weight, and productivity [9]. We used three diets, namely: standard feed (control), starter feed with 5% of skimmed powered milk as a whole milk replacer (experiment), and starter feed with 3% of the ORGANIC supplement (experiment). The composition of starter feeds and their nutritional value are shown in Table 1. 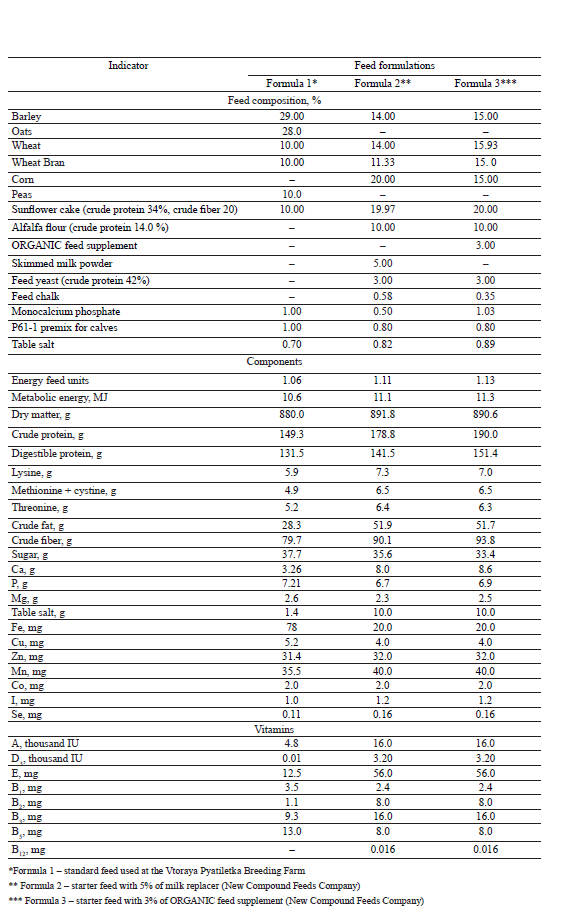 The formulated starter feeds (Table 1) were tested on three groups of ewes (12 heads in each) with single ram lambs (aged from 2 days to 4 months) based on the analogous pair principle (Table 2).

The guidelines by Dmitrik et al. were used to determine the morphological composition of lamb carcasses and conduct a microstructural analysis of the Longissimus dorsi muscle [12]. The animals’ internal homeostasis was assessed on the basis of morphological and biochemical blood analyses [13, 14]. The counting of erythrocytes and leukocytes was performed in the Goryaev chamber. The leukocyte formula was based on a blood smear stained using the Romanowsky-Giemsa technique. The results were biometrically processed using statistical methods (Microsoft Excel).

Adequate feeding, especially during intensive growth and development, is highly important for the animals’ productivity. In our study, the lambs’ needs for basic nutrients were determined by their health and growth indicators.

Table 4 shows the total feed consumption by the experimental lambs during the suckling period. Over 120 days of growth, the control group consumed 77.47 energy feed units and 8.62 kg of digestible protein. In the experimental groups, energy feed units were lower by 1.98 and 1.73 and digestible protein by 0.279 and 1.430 kg, respectively. As we know, ewes produce plenty of milk (1.2–1.5 liters) during lactation to meet their lambs’ nutritional needs. However, its amount significantly reduces in the months following lactation. For this reason, we formulated starter feeds containing the milk replacer (WMR) and the ORGANIC supplement (OS). 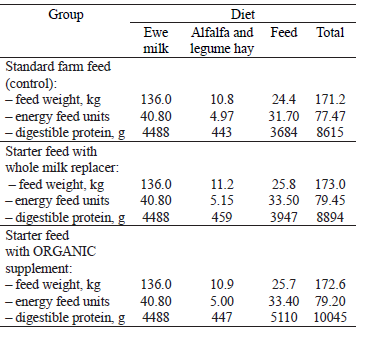 Table 4 Feed consumption by sheep during the suckling period 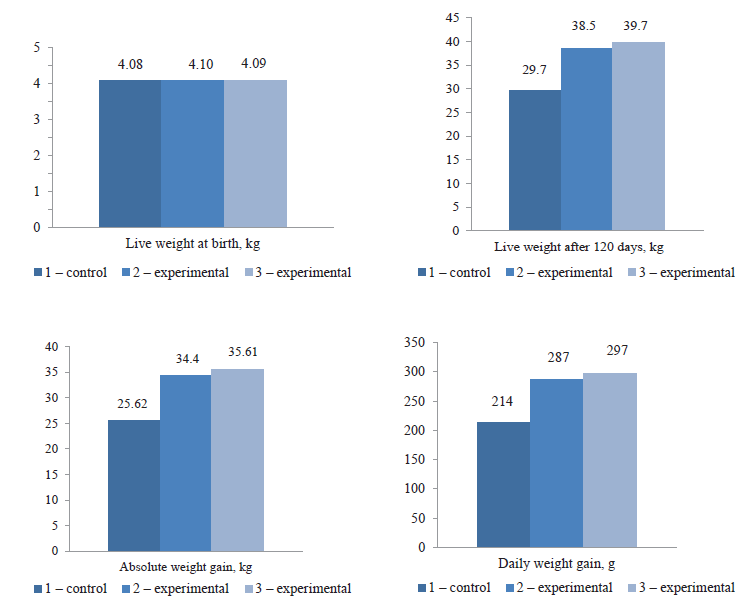 Therefore, we found that the use of starter feeds with the WMR and the OS instead of standard feed was zootechnically justified. These feeds contributed to a better palatability of the diet feed and a greater intake of nutrients.

Lamb production needs to be increased to enhance the economic efficiency of sheep breeding. The meat from sheep aged up to one year is easily digestible and has a low fat content. For this reason, it is recommended for dietetic diet. Scientists have also established that the most intensive weight gain occurs in the first six months. For the next stage of our study, we carried out a control slaughter of lambs at the age of four months.

This age was due to intensive protein deposition in the first six months. Adipose tissue accumulating more intensively in the later period of life affects the biological value of meat and the economic efficiency of lamb production.

Hematological parameters show a complete picture of the organism’s development. We found that the blood parameters of 4-month-old lambs of the experimental and control groups were within the physiological norms (Fig. 2). 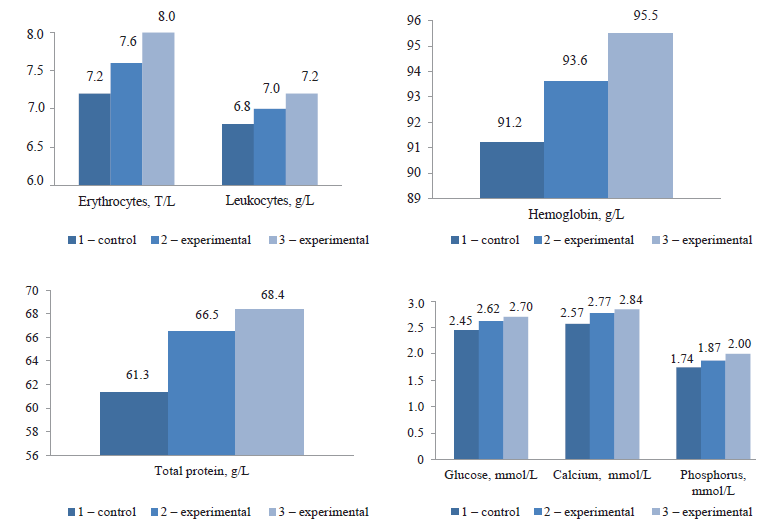 The contents of erythrocytes and hemoglobin were within the physiological norms, indicating the absence of anemia (Fig. 2). Compared to the control group, the blood of the experimental lambs that received starter feeds with the MR and the OS had a slight increase in hemoglobin, namely by 2.6 (P > 0.1) and 4.7% (P < 0.05), respectively, and in erythrocytes, by 5.6 and 11.1% (P < 0.05), respectively. This contributed to a more intensive metabolism. The contents of leukocytes were almost identical, with a difference of 2.9 and 5.9%, respectively.

Higher total protein in the serum of the experimental lambs indicated more intensive protein digestion and absorption of amino acids in the intestine, as well as protein synthesis in the liver. This finding was confirmed by the live weight gain indicators. In particular, total protein in the experimental groups that received the MR and the OS was 8.5 and 11.6% (P < 0.05) higher in comparison with the control group. Glucose contents were higher by 6.9 (P < 0.05) and 10.2% (P < 0.05), respectively, indicating a better supply of body cells with energy. Similar results were reported by Khompodoeva and Pashtetskaya et al. [15, 16].

Calcium was significantly higher in the blood serum of experimental lambs, namely by 7.8 (P < 0.05) and 10.5% (P < 0.05) in the groups that received the MR and the OS, respectively. A similar trend was observed in the amount of phosphorus: it was 7.5 (P < 0.05) and 14.9% (P < 0.01) higher in the experimental groups, compared to the control. This was indicative of better saturation of the bone tissue and stronger bones.

Next, we studied the morphological composition of animal carcasses to assess meat productivity. For this, we deboned the carcasses and analyzed various meat characteristics, especially the meat coefficient (the ratio of the weight of meat to the weight of bones and tendons) (Fig. 5). 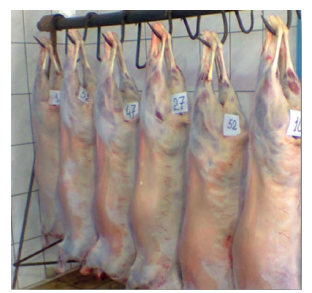 Apparently, higher feed intake and better assimilation of nutrients in the experimental groups contributed to a more uniform deposition of subcutaneous fat and the formation of muscle mass.

We found maximum meat weight in the carcasses of lambs that received feed with the milk replacer and the ORGANIC supplement, respectively. Particularly, their meat weight was 40.0 and 51.9% (P ≤ 0.001) higher than in the control group, with a meat coefficient of 3.34 and 3.57, respectively. Our data were consistent with those reported by Khayitov and Dzhuraeva [18].

The meat of young sheep from the experimental groups that received the MR and the OS had smaller muscle bundles, but it contained more fibers than the meat of the control animals, namely by 8.45 pcs./1 mm2 (2.1%) and 13.34 pcs./1 mm2 (3.3%), respectively. The marbling coefficient of meat in the group that received the OS exceeded that of meat in the groups fed on standard feed and the OS feed by 11.7 and 7.9% (P ≤ 0.05), respectively.

The microstructural analysis of muscle tissue samples (Fig. 6) showed that the Longissimus dorsi muscle of lambs had a greater number of muscle fibers of a smaller diameter with fatty layers, indicative of high nutritional and commercial qualities. 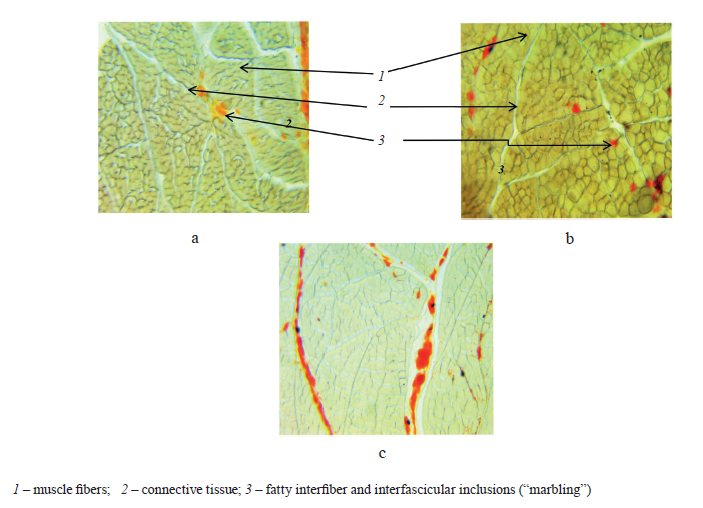 The biological value is the main indicator of the product’s nutritional value.

Thus, the morphological and microstructural analyses of the longissimus dorsi muscle tissue revealed higher quality indicators in the lamb fed on the OS feed, compared to the groups that received standard feed and the MR feed. Particularly, it had the largest number of muscle fibers of a smaller diameter, a higher marbling score, and a lower content of connective tissue. Therefore, the meat in the group fed on the OS feed was characterized as tender and juicy. The most nutritious and valuable were those animal carcasses which had a greater content of muscle tissue, since connective tissue contains fatty tissue that make meat a high-calorie product and give it a characteristic taste, color, and aroma.

The economic analysis (Table 6) proved the efficiency of using starter feeds with the high-protein milk replacer of the ORGANIC supplement when growing wool-and-meat lambs up to 4 months of age. 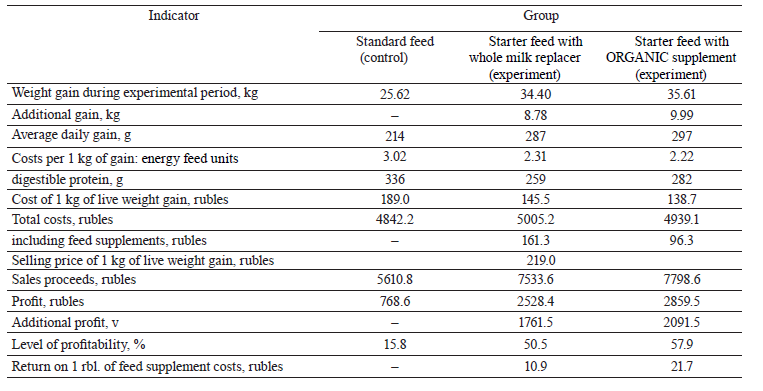 Table 6 Economic efficiency of lamb production (per head, in 2021 prices)

The authors were equally involved in writing the manuscript and are equally responsible for plagiarism.

The authors declare no conflict of interest regarding the publication of this article.