Beketov Sergey V. a
,
Kaledin Anatoly P. b
,
Senator Stepan A. a
,
Upelniek Vladimir P. a
,
Kuznetsov Sergey B. c
,
Stolpovsky Yury A. c
Affiliation
a Tsitsin Main Botanical Garden of Russian Academy of Sciences, Moscow, Russia
b Russian State Agrarian University – Moscow Timiryazev Agricultural Academy, Moscow, Russia
c Vavilov Institute of General Genetics, Moscow, Russia
Copyright ©Beketov et al. This is an open access article distributed under the terms of the Creative Commons Attribution 4.0. (http://creativecommons.org/licenses/by/4.0/), allowing third parties to copy and redistribute the material in any medium or format and to remix, transform, and build upon the material for any purpose, even commercially, provided the original work is properly cited and states its license.
DOI: http://doi.org/10.21603/2308-4057-2022-1-171-175 Foods and Raw Materials, 2022, vol. 10, no. 1, pp. 171-175

Introduction. A herd of zeboid cattle was created by the Snegiri Scientific and Experimental Farm (Moscow region, Russia) as a result of long-term selection and crossbreeding zebu (Bos indicus L.) with cattle (Bos Taurus L.). These hybrid cows have good physiological parameters, high resistance to diseases, and a significant adaptive potential. The quality of milk produced by zebu cows at different lactation and milking times has not been studied as well as their milking capacity. Therefore, we aimed to assess the variability of specific physicochemical indicators of milk produced by Snegiri’s zeboid dairy herd.
Study objects and methods. The milk of 193 zeboid cows (6–12% of zebu blood) from the Snegiri Farm was analyzed by standard methods for quality indicators such as fat, nonfat milk solids, density, bound water, freezing point, protein, and lactose. Then, we determined how these indicators changed depending on the lactation number and the time of milking (morning/evening). Statistical analysis was applied to process the data.
Results and discussion. Such indicators as nonfat milk solids, density, bound water, freezing point, protein, and lactose of zeboid cow milk were consistent with the normal indicators for raw cow’s milk. Only its fat content (4.39%) exceeded the norm. We found no correlation between the quality of milk and the number of lactations. However, the evening milk was more concentrated, with a significant increase in nonfat milk solids and density, as well as with a lower freezing point.
Conclusion. Zeboid cows, which can be bred in suboptimal conditions, produce milk suitable for dairy products since it has a high fat content regardless of lactation and milking time.

Although zebu cows are less prolific and have lower milk productivity than B. taurus breeds, they are better adapted to the environment and more resistant to a number of diseases. Zebu milk has a very high content of fat (5–6%) and protein (3.7–4.2%) [4]. Therefore, zebus are crossbred to produce hybrids with highfat milk [5]. Like zebu, zeboid cows produce milk that is suitable for dairy products (butter, cheese, cream, cottage cheese, etc.). In addition, high-fat milk production is more cost-effective. Since one liter of 3.5% milk contains 30% less fat than one liter of 5% milk, farmers need more low-fat milk to produce, cool, store, transport, and process, which increases the cost of a dairy product [6].

This field has been so important that the Soviet Union established a special authority, the Council for Breeding Zebu and Zeboid cattle, to provide guidance to its farms. As a result, Azerbaijan created a new breed of dairy cattle – the Azerbaijani Brown – by crossing zebu with the Brown Swiss and Brown Carpathian breeds. The new breed produced high-fat milk [7].

In 1956, the Snegiri Scientific and Experimental Farm of the Main Botanical Garden (Moscow region) became the first institution in the European part of Russia to experimentally cross the Azerbaijani zebu with the Black Pied breed [10]. The farm developed a unique breed of dairy zeboid cattle that was highly productive in a temperate climate zone with an average annual temperature of +4°C. Subsequently, new hybrids were created by crossing this unique breed with the Cuban and New Zealand zebu, as well as the Punjabi Sahiwal zebu. Then, the Snegiri Farm developed schemes to cross their bulls with other breeds, including the Black Pied, Jersey, Ayrshire, Kholmogory, Aulie-Ata, Simmental, Red Steppe, and Brown Latvian breeds. In 1999, they began to use Holstein bulls in crossbreeding to increase milk yield and improve the shape of the udder in hybrid cows [4].

The resulting crossbreeds were resistant to tuberculosis, brucellosis, leukemia, and other diseases. They inherited high fat and protein contents from zebu, had a good physiological capacity for milking, and increased milk yield in better feeding and maintenance conditions [11-13]. Among Snegiri’s zeboid cattle, the Elite-Record class crossbreeds produce maximum milk yield (over 5000 kg per lactation), with an average fat content of 4.64% [4].

Although the factors of milk production by zeboid cows have been studied quite well, the milk’s quality indicators deserve more attention [4, 10]. Therefore, we aimed to study individual physicochemical indicators of milk produced by Snegiri’s zeboid cattle depending on the number of lactations and the time of milking (morning or evening).

We studied the milk of 193 zeboid cows (6–12% of zebu blood) bred by the Snegiri Farm. In particular, we determined milk quality indicators such as fat, nonfat milk solids, density, bound water, freezing point, protein, and lactose. Then, we analyzed how they changed depending on the lactation number and milking time (morning/evening).

The above quality indicators were determined by the following methods: fat content by the Gerber method (volumetrically); nonfat milk solids – by calculation; density – on a lactodensimeter; bound water – in a RD-8 dryer (Funke Gerber); freezing point – cryoscopically; protein content – by the Kjeldahl method; and lactose content – by the refractometric method.

The standard deviation (σ) indicated the variability of the mean value (M). Primary data grouping and biometric calculations were performed in Excel Microsoft and STATISTICA.

Randomly selected data were statistically analyzed by the Student’s t-test, with the normality of distribution preliminarily determined by the Kolmogorov-Smirnov and Shapiro-Wilk tests. The nonparametric MannWhitney U-test was used in case the populations from which the data were selected for comparison were not distributed normally.

The analysis of milk quality against lactation number (Table 1) showed that only the eighth lactation cows had a significant decrease in milk fat compared with the first lactation cows (3.77 and 4.45%, respectively) (P < 0.05). We noticed that this indicator became more variable with the age of the cows (σ = 0.760 for the 1st lactation and σ = 1.087 for the 8th lactation).

The mean density of the zeboid cattle milk (26.62°А) corresponded to the minimum norm for high-quality milk, 1.027 g/cm3 (27°А). The low density of zebu milk is probably due to its high fat content, since studies show a decrease in density with an increase in fat [18]. 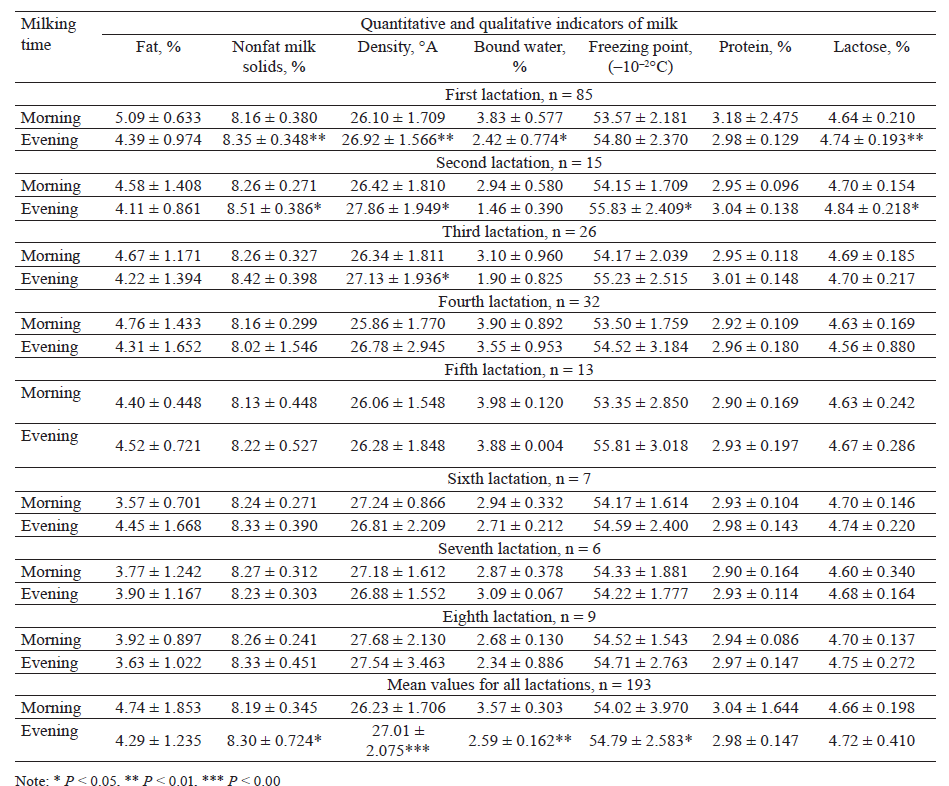 On the whole, the evening milk (Table 2) showed a significant decrease in bound water (from 3.57 to 2.59%) with a simultaneous increase in nonfat milk solids (from 8.19 to 8.23%) and a rise in milk density (from 26.23 to 27.01°A). The high density of the evening milk might be due to an increased amount of dissolved minerals, since the mean contents of protein and lactose did not change significantly in the entire herd. This was evidenced by the decrease in the freezing point of the evening milk from 54.02×10–2 to –54.79×10–2 °С.

The changes in the chemical and physical indicators of milk quality were primarily caused by the milk produced in the first three lactations. Besides, the number of cows in the first, second, and third lactations prevailed in the zeboid cattle herd.

Noteworthily, the crossing of zebu (Bos indicus L.) with cattle (Bos taurus L.) results in a pronounced relative heterosis, or the superiority of hybrids over the worst of the parental forms, in terms of milk quality, especially its fat content. Various authors have reported the following fat contents in the milk of the breeds that were used to create the zeboid cattle at the Snegiri Farm: 3.39 (Black Pied), 5.87 (Jersey), 4 (Ayrshire), 3.68 (Kholmogory), 3.85 (Aulie-Ata), 3.89 (Simmental), 3.82 (Red Steppe), 4.01 (Brown Latvian), and 3.6% (Holstein) [19–22]. The zebu (Azerbaijani, Cuban, New Zealand, and Sahiwal) produced 5.1–6.0% fat milk and the zeboid cattle in our study, 4.39% fat milk [7]. These data revealed an advantage of zeboid cattle over traditional breeds, since water metabolism in cows producing higher-fat milk puts less pressure on their body and is more economical in terms of energy and feed.

As a result of the study, we made the following conclusions.

2. The changes in the physicochemical indicators did not depend on the number of lactations. Only the eighth lactation cows showed a decrease in milk fat with age.

3. The evening milk was more concentrated, which manifested in an increased amount of NONFAT MILK SOLIDS, higher density, and a lower freezing point.

4. Given the high fat content, zeboid cattle milk is suitable to produce dairy products, regardless of lactation number and milking time. Besides, zeboid cattle can be bred effectively under suboptimal maintenance conditions.

Download
Contents
Abstract
Keywords
Introduction
Study objects and methods
Results and discussion
Conclusion
Conflicts of interest
References
Foods and Raw Materials uses cookies. By continuing to use the portal, you agree to the storage and use of cookies by the portal and partner sites on your device.
Manage files