Utama Gemilang L. a
,
Lestari Widia D. a
,
Kayaputri Indira L. a
,
Balia Roostita L. a
Affiliation
a Universitas Padjadjaran, Bandung, Indonesia
Copyright ©Utama et al. This is an open access article distributed under the terms of the Creative Commons Attribution 4.0. (http://creativecommons.org/licenses/by/4.0/), allowing third parties to copy and redistribute the material in any medium or format and to remix, transform, and build upon the material for any purpose, even commercially, provided the original work is properly cited and states its license.
DOI: http://doi.org/10.21603/2308-4057-2019-2-321-328 Foods and Raw Materials, 2019, vol. 7, no. 2, pp. 321-328

Napa cabbage (Brassica pekinesis L.) is one of the most cultivated agricultural products in Indonesia. In 2014 its production reached 602 468 t. The local leader in this field was the West Java province that yields 14.92 tons of napa cabbage per ha [1]. Since over 20% of napa cabbage cannot be utilised [2], this waste amount makes napa cabbage production inefficient.

Napa cabbage waste contains the same essential component, namely, polysaccharides in the form of cellulose, as napa cabbage itself. Cellulose is known to be a constituent component of plant cell walls, and it account for as much as 30–50% of total lignocellulose [3]. Currently, napa cabbage waste is used as animal feed, while its value could be increased, e.g., through production of cellulose-degrading enzymes.

Cellulose-degrading enzymes can be produced from napa cabbage waste, which is high in cellulose content, by yeast. Enzyme production by indigenous cellulolytic yeast requires optimal conditions, however, it is influenced by external factors, especially, temperature. Thus, too low temperatures can inhibit enzyme production because of the plasma membrane fluidity decrease which leads to disturbed metabolic activity [4]. On the other hand, too high temperature can damage cells and the structure of proteins, which are constituents of enzymes. The fact that temperature is an easily controlled parameter makes it possible to support yeast growth during the fermentation of napa cabbage waste for cellulose-degrading enzyme production. Therefore, the aim of this research was to characterise and identify indigenous yeast isolated from napa cabbage waste.

In our experiment we used nine treatments. Treatment factors were the type of yeast isolate and incubation temperature (Table 1). The isolation process of indigenous cellulolytic yeast from each treatment lasted for three days. The experiments were repeated three times.

The selection of the best treatment was performed based on quantitative analysis by determining the highest value of enzyme activity using Factorial Randomized Block Design. According to the results of isolation and identification of indigenous cellulolyticyeast from napa cabbage waste, descriptive analysis onthe total population of yeast during the production of cellulose-degrading enzymes was conducted.

Isolation and identification of indigenous yeast. The isolation of indigenous cellulolytic yeast from napa cabbage waste was carried out using the direct plating method [5–6]. One gram of crushed napa cabbage waste was added into 0.85% NaCl, inoculated into a modified PDA (PDA with a 3% yeast extract and 10 ppm antibiotics) and then incubated at 30°C for three days. The biochemical activities of the selected isolates were characterised with the help of RapID Yeast Plus System Kit [7]. For species identification of potential indigenous yeast with the highest cellulose-degrading enzyme activity we used rRNA gene internal transcribed spacer (ITS) region. Sequence analysis was carried out using primers ITS1 (5′-TCCGTAGGTGAACCTGCGG-3′) as forward and ITS4 (5′-TCCTCCGCTTATTGATATGC-3′) as reverse. DNA amplification was performed by Macrogen Inc. The results were compared with the GenBank database using the BLAST algorithm [8].

Asliha and Alami state that macroscopically, yeast are round, white, with membranous colony texture, while microscopically, multilateral yeast bud and its cell size ranges from 1 to 7 μm [12]. In addition, the microscopic analysis allowed three isolates to be chosen because they had cell size classified as that of yeast. An average cell diameter of the S2, S6 and S8 was 3.87, 3.76 and 4.24 μm, respectively (Fig. 1). The selected isolates were purified, and their biochemical activities were tested using the RapID Yeast Plus System (Table 3). 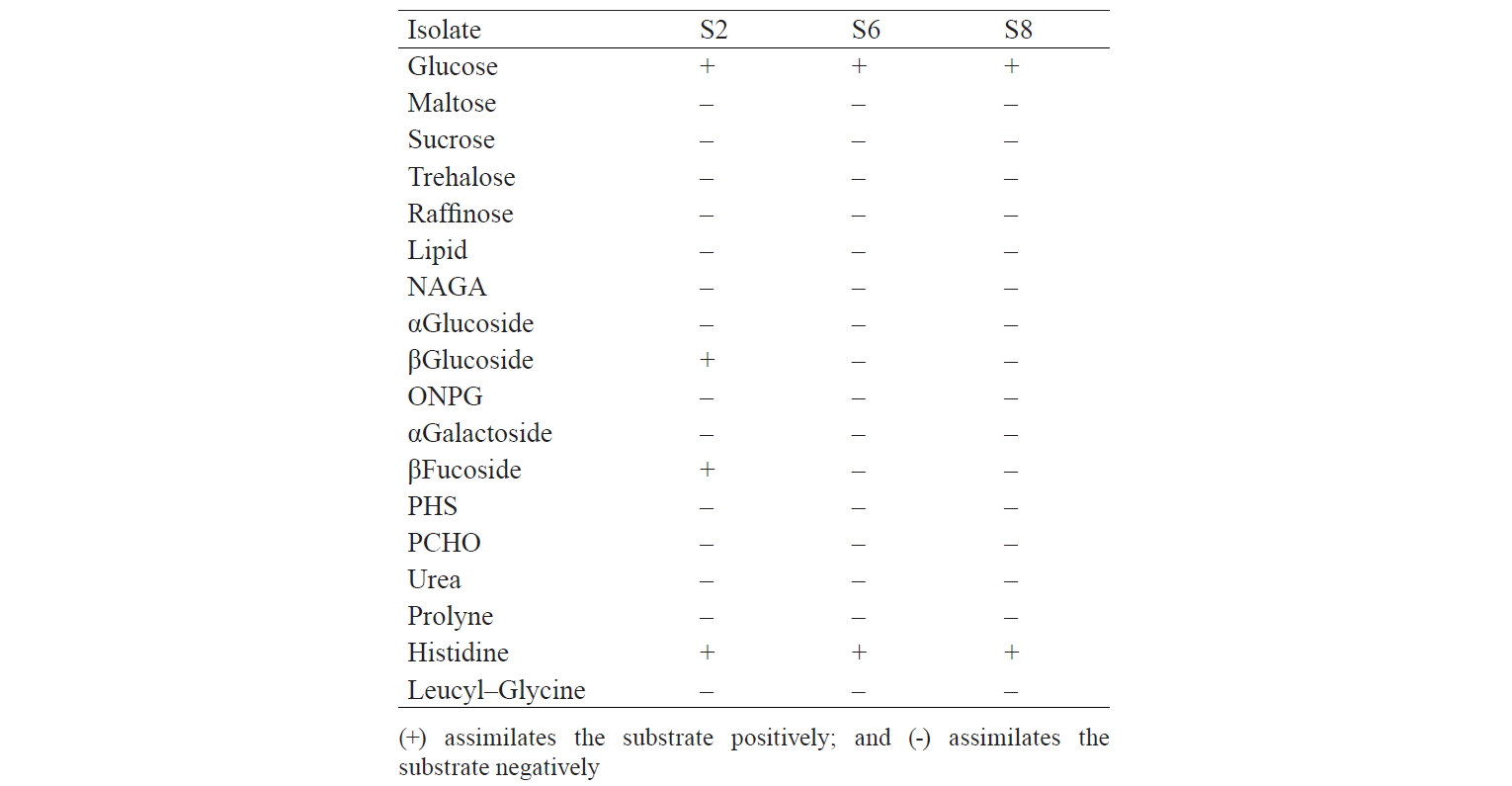 The identification results are based on the biochemical properties of the isolates tested against the reacted compound. The glucose or glucoside hydrolysis ability was only shown by S2 isolates against β-Glucoside and β-Fucoside. Lopez et al. states that several non-Saccharomyces yeast could be found in soil, fruits, trees, and damaged food or drink that has glycolytic β-glucosidase activity [13]. The biochemical properties of indigenous yeast (Table 5) are also supported by Mateo et al., who found the glycolytic activity, especially β-glucosidase activity, on indigenous yeas [14]. It implies that glucose can be hydrolysed into acidic compounds which reduce pH until it changes the colour of the resultants. Macroscopically, two isolates identified as S6 and S8 had different characteristics. They differed from the characteristics of Candida sp. that has the anamorphous properties, does not have a sexual reproduction phase, and has unstable phenotypic characteristics [15]. Therefore, although the two isolates were different in form, colour, and oxygen requirements, they had the same biochemical activity.

Total population of indigenous yeasts. The results of indigenous yeasts total population determination during incubation are demonstrated in Fig. 2. During day 1 of incubation, the total population in all treatments decreased because the isolates still were in the adaptation phase in the medium. This phase is called the lag phase or the cell adaptation period of new microorganisms to the environment [16]. Nguong et al. states that it takes 16 h for yeast with biochemical activity similar to that of the S2 isolate to adjust to a new environment [17].

After the adaptation phase, the total population of all treatments increased. The increase is the exponential growth phase, where cells of microorganisms have adapted to the environment and began to multiply so that the number of mass cells or cell density increases rapidly [16]. Spectrometric analysis preformed by Kanti et al. revealed that the population of indigenous yeast, such as Candida, Rhodothorula, Pichia, and Debaryomyces, began to increase from 24th h and reached a plateau by the 96th h (OD 600 nm) [5].

Cellulose-degrading enzyme activity. Cellulosedegrading enzyme activity of indigenous yeast is shown in Fig. 3. The highest enzyme activity produced by S2 was 0.598 U/mL at an incubation temperature of 45°C. The high temperature caused an increase in the rate of biochemical reactions, especially for indigenous yeast that has similar biochemical activity with Hanseniaspora. Fennema states that a high temperature affect various reactions [19]. The enzyme belongs to the group of mesozyme enzymes (in the range of 20–50°C) [20]. According to López et al., the glycolytic activity (β-glucosidase) of H.guilliermondii at 28°C is about 0.064–2.887 U/mL [13, 21].

S6 isolates obtained at the incubation temperature of 45°C also displayed a high enzyme activity. It is because the growth of Candida-like organisms occurred at the maximum temperature (40–45°C) [20]. As stated by Shuler and Kargi, enzymes are Growth-associated products, i.e. the growth of microorganisms is directly proportional to the product concentration [16]. However, the S8 isolate demonstrated the highest enzyme activity when treated at 37°C: its value was 1.203 U/mL on day1 and 1.188 U/mL on day 2.

Table 4 shows analysis of variance. F-value was greater than Pvalue probability (0.05), which indicated the presence of at least one treatment that significantly differed from the others. Hence, it required an additional test, namely, the Duncan Test.

Table 5 demonstrates the Duncan Test results. According to the data, the S8 treatment incubated at 37°C produced enzyme with an activity significantly differing from the other treatments. This is in accordance with the result of Sulman and Rehman, that Candida-like organisms are able to produce cellulose-degrading enzymes with the highest activity at 37°C [11]. The growth of isolates at 27°C cannot produce enzymes with high activity because energy supply from the environment is low, while at 45°C the growth of isolates is inhibited and the structure of the enzyme is denatured so that the activity is not optimal. Therefore, incubation at 37°C gives enough energy for isolates to grow without damaging the structure of the enzyme produced.

The different activity of the enzyme produced by S6 and S8 could be caused by different phylogenetics between the two isolates. According to Birmeta et al., Candida sp. that was mentioned as C. krusei has close proximity to P. fermentans having certainly different biochemical ability than C. krusei [24]. P. fermentans has an anamorphic form, Candida lambica, but it is not uncommon to find C. lambica mis-identification as C. krusei caused by similar biochemical abilities of the yeast. Nevertheless, C. lambica is able to assimilate xylose, compared to C. krusei cannot [25]. Meanwhile, the ability of yeast to assimilate xylose has not been determined by the RapID Yeast Plus System method, so differences between C. krusei and C. lambica have not been identified. 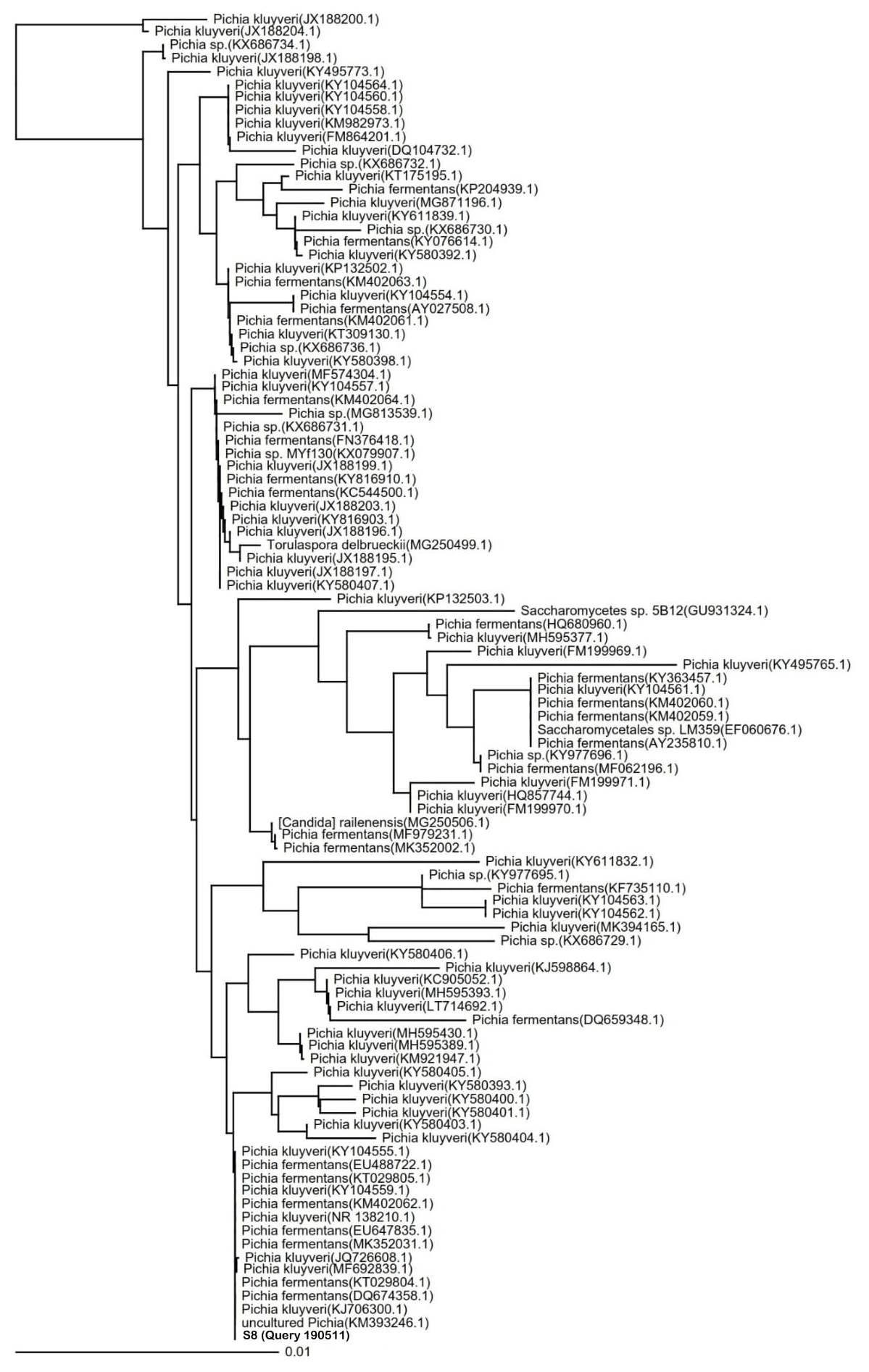 According to Bengoa et al., despite P. fermentans and C. lambica can growth at a temperature up to 37°C, the optimal temperature is 25–30°C [28]. Such strain as I. orientalis has the unique properties, as this microorganism can grow at a higher temperature level. Miao et al. reported that I. orientalist strains optimally grows and produces a high amount of ethanol at 41°C, which indicates its thermostability [29].

Three species of indigenous yeast were isolated from napa cabbage waste. The highest cellulosedegrading enzyme activity (1.188U/mL) displayed the S8 isolate incubated at 37°C for three days. Its average cellulose-degrading activity was 0.684U/mL. According To the species identification, the S8 isolate showed a 100% similarity to Pichia fermentans UniFGPF2 (KT029805.1).

The authors declare no conflict of interests.

The authors would like to thank the Student Research Group, Vivi Fadila Sari, Isfari Dinika and Syarah Virgina for their help with the experiments.

Download
Contents
Abstract
Keywords
Introduction
Study objects and methods
Results and discussion
Conclusion
Conflicts of interest
Acknowledgements
References
Periodic Publications uses cookies. By continuing to use the portal, you agree to the storage and use of cookies by the portal and partner sites on your device.
Manage files