Introduction. The fisheries industry generates large amounts of fish by-products. Their utilization is one of the relative tasks for fish manufacturers. Hydrolysate from fish by-products is regarded as a valuable bioactive protein source for feed production. In this study, we aimed to optimize hydrolysis conditions for the industrial by-products of catfish.
Study objects and methods. We studied the by-products of industrially processed Pangasius hypophthalmus fillet using biochemical methods to find the optimum hydrolysis conditions (enzyme type, enzyme/substrate ratio, temperature, water amount, and time). Then we built a regression model and verified it experimentally.
Results and discussion. According to the Box-Behnken design model, the optimum hydrolysis conditions were determined as 10% of water, 0.48% of SEB-Neutral PL enzyme, 57°C temperature, and 6 h duration. We found no significant differences between the modelled and the verified experimental values. The resulting hydrolysate was rich in nitrogen from amino acids, and its other parameters complied with the current national standards. The microbal and sensory attribites satisfied quality requirements as an animal feed supplement.
Conclusion. The study results are commercially applicable in feed production, providing a solution for the fisheries industry in byproduct treatment.

Tra catfish (Pangasius hypophthalmus L.) accounts for an essential part of Mekong Delta’s and Vietnamese fisheries’ yield. In 2019, their production area totaled 6600 ha yielding 1.42 million tons, of which 60–70% were by-products [1–3]. The production expansion in order to meet the domestic and export demand has caused a growing concern about the fisheries’ by-product treatment, especially from Pangasius processing. The Mekong Delta, where Pangasius production and processing are more developed, needs economical and environmentally friendly solutions for large amounts of by-products generated by the local manufacturing facilities [4]. Recent years have seen an interest in the utilization of Pangasius by-products to manufacture value-added products, such as fish powder, fish skin, and viscera.

Fish powder is the most popular by-product used as a primary protein supplement for animal feeds. Fish byproducts are a major source of lipids, native proteins, and hydrolysates, accounting for 10–20% of the total fish protein [5, 6]. Presently, most fish powder manufacturers use the traditional procedure with high pressure and temperature, resulting in products with a low digestive and absorptive index.

Enzymatic protein hydrolysis of fish by-products is currently a promising approach to making products with various applications and high nutritional values [5, 7–10]. Proteases are among common enzymes used in this process [6]. They hydrolyze protein in fish byproducts to smaller peptides that usually contain 2–20 amino acids. Fish hydrolysate is a liquid of amino acids – peptides produced by speeding up fish protein hydrolysis using proteases under controlled conditions. When applied in animal feed products, fish hydrolysate improves the digestion and absorption of proteins, as well as feed intake, efficiency, and protein utilization [11–14]. Furthermore, protein hydrolysate enhances the attractiveness and palatability of the feed, thus increasing its consumption [15].

This study assessed optimal conditions for Pangasius hydrolysis, such as the type of enzyme, enzyme/substrate ratio, temperature, time, and the amount of water added by analyzing total nitrogen and amino acids. As a result, we identified the initial conditions to produce hydrolysates from Pangasius by-products for the animal feed industry.

Materials. Pangasius by-products, including heads, bones, and fins (Fig. 1), were collected from the processing factory of the Travel Investment and Seafood Development Corporation (Trisedco, Vietnam). They were minced into small pieces of 3–5 mm and stored at –20°C until use.

Optimal hydrolysis conditions. The materials were defrosted, mixed with 20% water, and heated to 55°C before adding enzymes. Hydrolysis was performed in a pilot-scale hydrolysis equipment with a capacity of 80 kg/batch. It was terminated by heating to 85–90°C in 10 min.

After hydrolysis reactions, the mixtures were filtered and analyzed for total nitrogen (Naa). The optimal hydrolysis conditions were obtained by optimizing a single condition at a time in consecutive order. The resulting condition in the previous experiments was used as a constant condition in the later experiments. The protein recovery efficiency was evaluated using the ratio of nitrogen amino acid (Naa) to total nitrogen (Nt) in the hydrolysates.

Evaluating the chemical composition of the materials. We analyzed such parameters as crude protein, moisture content, lipid, ash, TVB-N, and total aerobic microorganisms.

Choosing the enzyme. We assessed four enzymes, namely protease, bromelain, papain, and SEB-Neutral PL. Hydrolysis reactions were performed with the enzyme/substrate (E/S) ratio of 0.3%, temperature of 55°C, and 20% water added in 5 h. The hydrolyzed products were then analyzed for total protein and Naa to choose the most effective enzyme. The chosen enzyme was used in the later experiments.

Choosing the optimal temperature. Five temperatures (45, 50, 55, 60, and 65°C) were assessed. The hydrolysis was performed with the optimal enzyme and enzyme/substrate ratio from the previous experiments and with 20% water added in 5 h.

Choosing the optimal hydrolysis time. Hydrolyses with the optimal conditions from the previous experiments were performed in five different periods, from 3 to 7 h. The products were then analyzed to choose the optimal reaction time.

Optimizing the hydrolysis procedure. A Box-Behnken design was used to investigate the effect of three factors: A – hydrolysis time, B – enzyme/substrate ratio, and C – temperature on the Naa/Nt ratio [19]. An optimal scenario was obtained, and a verification experiment with the optimum conditions was performed in the lab.

Data analysis. Each experiment was done in triplicate, each time with three samples, and the results were averaged. The data were processed and charted in MS Excel 2007 and model analysis was performed in Design Expert (version 10).

Materials’ quality. The quality of the by-products used for hydrolysate production was evaluated through chemical and microbiological parameters, as shown in Table 1. 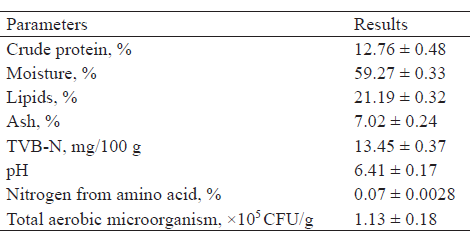 Table 1 Chemical and microbiological parameters of the materials

The materials’ crude protein and moisture contents were 12.76 and 59.27%, respectively, similar to other research in Vietnam [20]. TVB-N, a freshness quality indicator, was 13.45 mg/100 g, which was much better than the best quality limit of 25 mg/100 g. Although the total microorganism count was 1.13×105, a large number relating to long storage before use, the TVB-N result indicated that the materials were still fresh and did not contain any spoilage compounds that could adversely affect the quality of hydrolysates [21]. 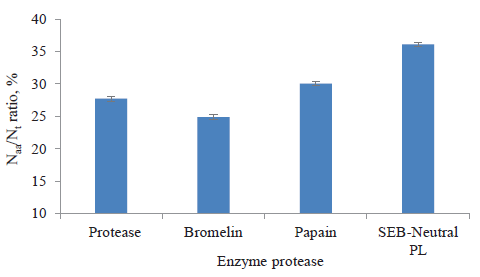 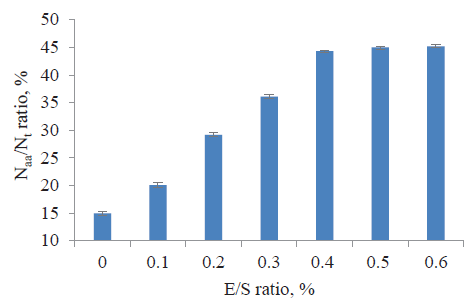 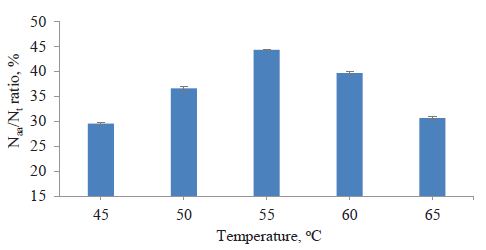 The results showed that the higher the temperature, the better the hydrolysis performance till it reached optimum at 55°C. The effective ratio went down as the temperature increased beyond that. Thus, 55°C was chosen for use in later experiments, and the range of 55–60°C was used in the optimal analysis.

Choosing the amount of added water. The amount of added water influences the enzyme’s dispersal and contact with substrates. As we can see in Fig. 5, hydrolysis performance increased steeply when the water amount went up from 0 to 10%. Then it slowed down considerably with water increasing from 10 onward to 30%, suggesting an equivalent efficiency. To economically use other substances in the hydrolysis reaction, we chose 10% added water to use in later experiments. 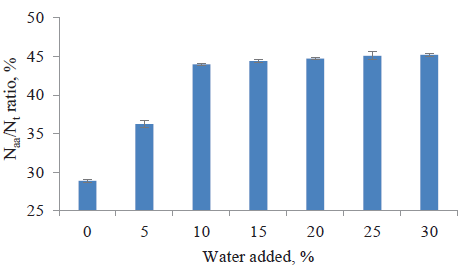 Choosing the hydrolysis time. The samples were hydrolyzed in 3, 4, 5, 6, and 7 h under the conditions from the previous experiments (0.4% SEB-neutral PL, 55°C, and 10% added water). The hydrolysis performance increased sharply from 34.44 ± 0.34% (3 h) to 43.90 ± 0.26% (5 h), then slowing down and reaching highest at 44.65 ± 0.30% (7 h). The difference between the samples hydrolyzed in 6 and 7 h was not statistically significant (P > 0.05). Although nitrogen solubility increases with time in enzyme hydrolysis, after a certain period, the formation of hydrolysis products and the reduction of peptide bonds during hydrolysis inhibit enzyme activities and decrease hydrolysis rate [22, 23]. Therefore, the effective range of duration was determined to be from 4 to 6 h. 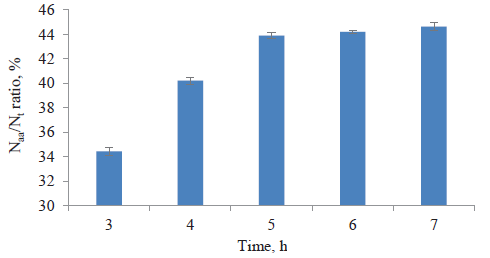 Optimizing Pangasius by-product hydrolysis with Seb-Neutral PL enzyme. We studied the influence of different variables on the outcome of hydrolysis by performing Box-Behnken Designs in Design-Expert. In particular, we used the following factors: A – enzyme/substrate ratio (0.3–0.4–0.5%); B – temperature (50–55–60°C); and C – hydrolysis duration (4–5–6 h).

The ANOVA results are presented in Table 2.

The model was significant with the F-ratio of 155.85 (P < 0.0001) and the lack of fit of 3.72 (P = 0.2190). The variables AB, AC, BC, A2, B2, and C2 all had P < 0.05 and therefore were significant and included in the regression formula. The model to determine the relationship between the dependent variable Naa/Nt and enzyme/substrate ratio, temperature, and duration, as well as their interactions, was presented in the following formula:

In formula (1), b1, b2, and b3 were positive, showing that the hydrolysis performance (Naa/Nt) was directly proportional to the analyzed factors: enzyme/substrate ratio, temperature, and duration. ǀb1ǀ < ǀb3ǀ < ǀb2ǀ suggested that the enzyme/substrate ratio had a more substantial influence on the performance of the hydrolysis reaction than the other factors. The coefficients b12, b22, and b32 were negative, suggesting that the graphs were parabolic faces with concave surfaces facing downwards and having extreme points. The coefficients b12 and b13 were positive, showing a positive interaction between temperature and time, with the enzyme/substrate ratio increasing hydrolysis performance. At the same time, b23 was negative, indicating that the interaction between temperature and time was inversely proportional to the Naa/Nt ratio. This could be explained by the nature of enzyme reactions, where high temperature and prolonged duration might cause unstable enzymes and reduce enzyme hydrolysis activities. The effects of these factors on the Naa/Nt ratio were graphically presented in Fig. 7.

Based on the Box–Behnken design model, the optimum hydrolysis conditions (enzyme/substrate ratio = 0.48%, temperature = 56.52°C, and duration = 5.77 h) was chosen to conduct a laboratory experiment. The results of the laboratory experiment in comparison with the predicted values are shown in Table 3.

There were no significant differences between the predicted and experimental values. Therefore, we proposed the following optimum hydrolysis conditions for Pangasius by-products: 10% added water, 0.48% SEB-Neutral PL enzyme, 57°C, and 6 h.

Product quality. The results of the hydrolysate quality evaluation are presented in Table 4. 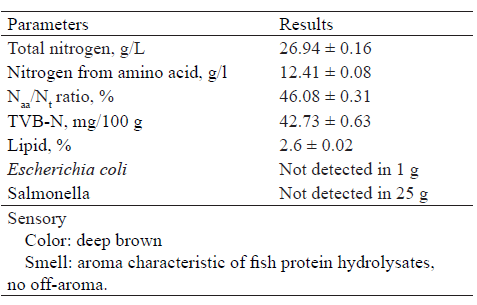 The resulting Pangasius hydrolysate was a highquality source of nutrition with 12.41 g/L nitrogen from amino acids, accounting for 46.08% of total nitrogen (26.94 g/L). Its other parameters fully complied with the current national standard QCVN 01-190:2020/BNNPTNT, making it suitable for use as a supplement to animal feed to improve its amino acid content and aroma.

This research was funded by the Ministry of Science and Technology through the project “Improving technology and equipment for producing fishmeal and seasoning powder from Pangasius by-products” (Code DM.49.DN/20). The study was also part of the project “Improving the production technology of lysine-rich aquatic feed from Pangasius by-products” (Code SXTN. 05.19/CNSHCB) approved by the Ministry of Industry and Trade.