New microorganisms that are resistant to traditional antibiotics have recently become known to medicine [1]. Today, large numbers of people worldwide are dying from various infections caused by antibiotic-resistant strains of microorganisms [2]. Therefore, there is an increasingly important scientific and practical need for new antimicrobial drugs with a wide spectrum of action.

Modern researchers are actively studying bacteriocins produced by Gram-positive bacteria, which are antibiotic proteins [3]. Due to their complex structure, bacteriocins can be classified as peptides with different activity, gene control, and biochemical processes [4, 5]. They do not develop antimicrobial resistance and therefore are widely used in medicine and pharmacology [4, 6]. These substances are known for high antibiotic activity against closely related strains of microorganisms. Lactic acid microorganisms are among the most effective producers of bacteriocins and bacteriocin-like agents [3].

Bacteriocinogenesis has apparently evolved as a result of adaptation and survival in a harmful environment, having occupied a certain niche in microbiology [7]. Bacteriocins are produced by lactic acid bacteria – natural microbiota in the digestive system of humans and animals, as well as in food raw materials, products, or animal feed. Bacteriocins colonize natural and industrial substrates [8–10]. Most often, they do not dominate over saprophytic microorganisms of spore and non-spore forms, over cocci, yeasts, molds, and Gram-negative bacteria, which inhibit antibiotics [11, 12].

Bacteriocin production is a complex process that requires optimal parameters to affect the system. Not all bacteria can synthesize bacteriocins. It has been proved that the ability to synthesize a small amount of bacteriocinogenic substances by individual strains is hereditary [13, 14]. However, the synthesis can be improved by genetic engineering, DNA-tropic substances ultraviolet rays, peroxides, chemical mutagens, and other agents [15, 16]. Since mid-20th century, extensive experiments have been in operation to create new bacteriocin-producing bacteria.

A number of Gram-positive strains, such as Lactobacillus, Streptococcus, Bacillus, Mycobacterium, Staphylococcus, Corynebacterium, Leuconostoc, Sarcina, Micrococcus, Clostridium and Streptomyces, have been reported to synthesize bacteriocins [2, 3, 17, 18].

A lot of current research is focused on bacteriocins produced by lactic acid microorganisms. For example, diacetin B-1, a bacteriocin isolated from Lactococcus lactis, consists of 37 amino acid residues and has a molecular weight of 4300 Da [19–21]. Scientists know of 14 strains of Lactococcus lactis capable of synthesizing bacteriocins. All bacteriocins inhibit the growth of S. aureus, P. acidilactici, L. Plantarum, and many Listeria species [14, 22, 23].

Amylovorin 471, a bacteriocin produced by Lactobacillus amylovorus DCE 471, is used as a biopreservative in food and feed [24].

A purified form of enterocin A obtained from Enterococcus faecium contains 47 amino acid residues, including 4 cystine residues, and has a molecular weight of 4289 Da. Enterocin A has a similar amino acid sequence to that of nisin, a bacteriocin produced by lactic acid bacteria [25].

Bacteriocins are also formed by other types of enterococci. For example, E. faecalis S-48 produces a 80 kDa bacteriocin that is sensitive to proteases and has an inhibitory effect on E. faecalis [26].

Thus, many infectious diseases can be prevented and treated by isolating new strains of lactic acid microorganisms that produce bacteriocins with antibacterial action [27, 28]. Unlike Lactobacillus strains, the antimicrobial activity of Lactococcus strains has not been well studied [2, 14].

Therefore, there is an urgent need for isolating new antimicrobial and antibiotic-resistant bacteriocins formed by lactic acid bacteria and other antagonist microorganisms, as well as studying their properties and prospects for the pharmaceutical industry [29, 30].

We aimed to study the antibiotic activity and resistance of bacteriocins produced by lactic acid bacteria and other antagonist microorganisms isolated from natural systems in the Kemerovo region.

In particular, we aimed to:

Prior to isolation, we incubated microorganisms on an agar medium melted and poured into Petri dishes (covering a third or a quarter of the area), then sterilized and cooled. The incubation lasted 4–5 days at 30°C (until complete or almost complete sporulation by vegetative cells). Then, the grown colonies were suspended in 30 mL of a sterile liquid T3 medium. The flasks with the inoculated medium were placed on an orbital shaker (220 rpm, 72–80 h, 30°C). The stage of sporulation was determined by phase contrast microscopy. At the end of incubation, we found 98–100% of spores and crystals in the liquid medium in relation to the vegetative cells. The number of colony-forming units per mL of culture fluid (CFU/mL) was determined with a series of dilutions followed by incubation in Petri dishes with a T3 medium (five replicates) for 24 h at 30°C. After incubation, we counted the grown colonies and expressed the results in CFU/ml, or spores/ml in our case.

The quantity of microorganisms (titer) in the suspensions of overnight broth cultures grown on standard media was determined by optical density measurements at 595 nm.

Lactic acid bacteria and other antagonist microorganisms isolated from natural sources in the Kemerovo region were assessed for their antimicrobial action in two ways, using the diffusion method and measuring optical density.

Diffusion method. Test strain bacteria inoculated onto an agar medium using the spread plate technique were immediately covered with paper disks impregnated with the metabolites of microorganisms under study (10 μL/disk). A disc with a nutrient medium was used as a control, and a disc with ciprofloxacin (a standard antibiotic) was used as a reference drug. The plates were incubated for 24 h at a temperature optimal for each test strain. The quantity of microorganisms was determined by measuring the size (mm) of a transparent zone around the disc, indicating the absence of microbial growth [31].

Optical density measurement. Test strain bacteria were incubated with the metabolites in 96-well culture plates [32]. We resuspended broth cultures aged for 12 h in a medium corresponding to the species of microorganisms to inoculate, bringing their amount to ~ 105 CFU/mL. At the same time, we added the cell suspension and the metabolites under study to the wells in an amount of 1/10 of the total volume. A liquid nutrient medium was used as a control and ciprofloxacin was used as a reference drug (10 μg/mL). The total volume of the suspension in the well was 200 μL. The experiments were performed in duplicate. Incubation was carried out on a shaker at 580 rpm at a temperature optimal for each test strain. After 24 h, we measured the optical density on a PICO01 spectrophotometer (Picodrop Limited, UK) at 595 nm. The bactericidal activity was determined by changes in the optical density compared to the control. In the wells where cell growth stopped or slowed down, the optical density was lower than in those with normal growth.

Microbial spores were stained according to the Schaeffer-Fulton method. The method uses a combined effect of a concentrated brilliant green solution and temperature on the impermeable spore membrane with further decolorization of the cytoplasm of a vegetative cell and its contrast staining with safranin. Microscopic examination showed that the spores were stained green and the cells, red. To establish the presence of flagella, we studied the mobility of cultures in the “squashed straw” preparations [33].

The antibiotic resistance was determined by the zones of growth inhibition for the isolates with antibiotic discs. For this, we inoculated isolate cells onto a temporary medium using the spread plate technique, with antibiotic discs on the agar. The experimental results were recorded after 24 h of cultivation in the incubator at 28°C [31].

Table 1 shows the results of using the diffusion method to assess the antimicrobial properties of lactic acid bacteria and other microorganisms isolated from natural sources in the Kemerovo region. 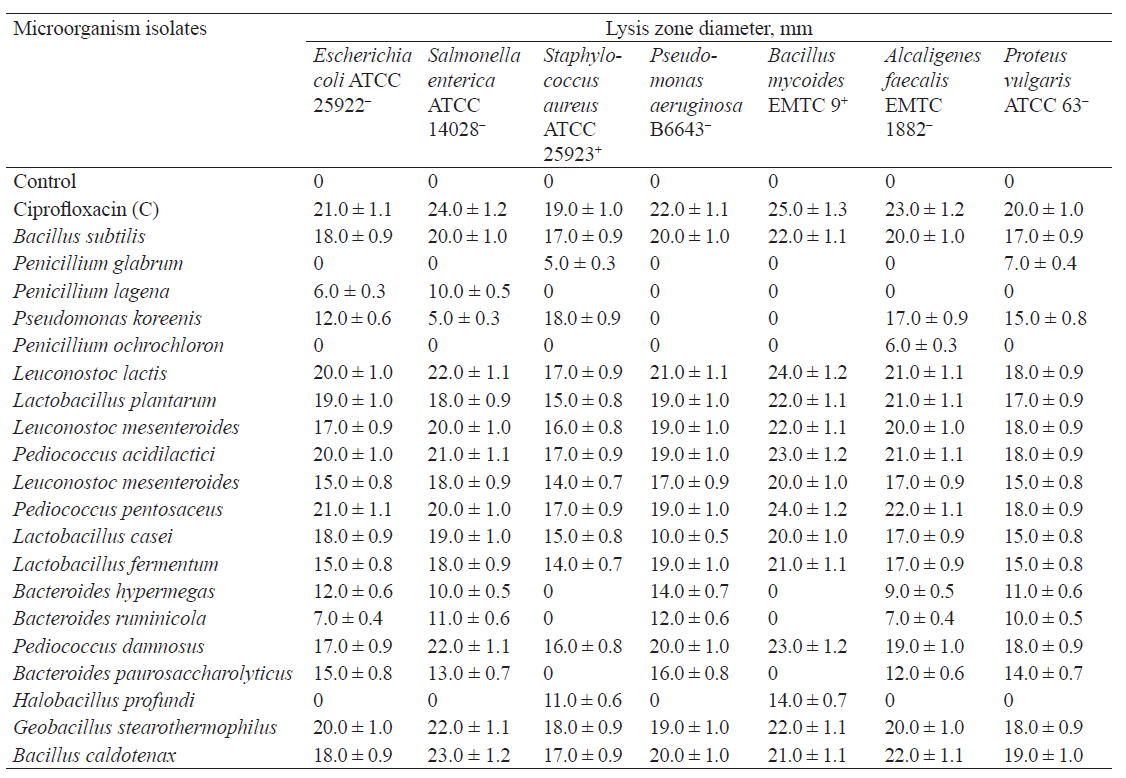 These isolates were tested for antibiotic resistance, i.e. resistance of a strain to one or more antibacterial drugs, or decreased sensitivity (immunity) of a culture to the action of an antibacterial substance.

Tables 2–5 show the results of studying the antibiotic resistance of microorganisms isolated from natural sources in the Kemerovo region.

As we can see, Bacillus subtilis proved to be resistant to ampicillin, gentamicin, and tetracycline. It exhibited high sensitivity to neomycin, novogramon, kanamycin, carbenicillin, levomycitin, and ceporin, but low sensitivity to benzylpenicillin, monomycin and clotrimazole.

Leuconostoc lactis was highly sensitive to ampicillin, gentamicin, benzylpenicillin, and novogramon, insensitive to clotrimazole and monomycin, and resistant to streptomycin, tetracycline and kanamycin.

Leuconostoc mesenteroides was resistant to streptomycin, tetracycline, and kanamycin, insensitive to clotrimazole and monomycin, and highly sensitive to ampicillin, ceporin, benzylpenicillin, gentamicin, levomycitin, and novogramon.

Thus, we studied the antibiotic activity and resistance of lactic acid bacteria and other antagonist microorganisms isolated from natural sources in the Kemerovo region. We established a correlation between the type of isolate and the type of antibiotic. According to the study, eleven microorganisms out of twenty exhibited high antimicrobial activity, while the rest of the strains had an insignificant effect on the test strains and opportunistic microorganisms.

The progressive resistance of the studied bacteriocinproducing microorganisms to antibiotics allows for their use in the production of pharmaceutical antibiotic drugs.

The authors state that there is no conflict of interest.

The study was part of the federal targeted program on “Obtaining Pharmaceutical Substances Based on Antagonist Microorganisms Isolated from Natural Sources” (Unique Project Identifier RFMEFI57418X0207) under Agreements No. 075-02-2018-1934 of December 20, 2018 and No. 075-15-2019-1383 of June 18, 2019 of the Ministry of Science and Higher Education of the Russian Federation (Minobrnauka).