The quality of meat and meat products depends on the amount and state of proteins present there. Biochemical reactions occurring during processing and storage of meat affect the structure and functional properties of meat protein [1, 2]. These changes lead to two directions: splitting of large protein molecules and aggregating of small protein molecules. The result is protein denaturation that affects the technological properties of meat. Changes in myofibrillar proteins have a great influence on the texture and other properties of meat and meat products [2]. In order to properly manage the processing and storage of pork meat, it is necessary to determine the state of the present proteins. Several techniques are used to analyse myofibrillar and sarcoplasmic proteins in meat.

To determine the influence of soluble and insoluble proteins on meat quality, precise methods for quantifying each protein need to be developed. Quantification of isolated proteins is a complex problem. The process of densitometric scanning of coloured SDS-PAGE gels in the traditional slab PAGE is complicated and insufficiently precise. For this reason, several authors recommend the application of new techniques. The aim of this paper is to investigate application possibilities of high performance SDS-CGE for the identification and quantification of myofibrillar and sarcoplasmic proteins in pork meat.

Preparation of the capillary electrophoresis (CE) instrument. Electropherograms were obtained using a capillary electrophoresis CE 7100 instrument (Agilent Technologies, PaloAlto, CA) equipped with a non- column DAD for UV detection and spectra collection. Migration time and peak areas of individual protein molecules in the electropherogram were analysed using ChemStation Software (Agilent Technologies, PaloAlto, CA). The preparation of the CE instrument was carried out according to certain recommendations [18].

The injection of the samples was performed electronically using -5 kV for 20 seconds. After dipping the inlet electrode in water, the proteins were separated by using -16.5 kV (-500 V/m-2) during 30 minutes. A pressure of two bars was used to both inlet and outlet vials during the run. After the run was completed, the capillaries were conditioned as follows: rinsed at high pressure (4 bar) with 0.1 N NaOH during 15 min, rinsed at high pressure (3.5 bar) with 0.1 N HCl during 5 min, and with water during 10 min. All the rinses were carried out in the forward direction, that is pressure was used to the inlet vial. The capillary temperature was maintained at 25ºC. The detection wavelength was 220 nm with a bandwidth of 20 nm (no reference wavelength) and a response time of 1 second. The glass vials of 2 mL were used for all utilized reagents. The filling volume was 1.2 mL, except the vials for water dipping, which contained 1.6 mL water, and the vials for waste, which contained 0.6 mL water. Three separate waste vials were used to collect 0.1 N NaOH, 0.1 N HCl/water and the SDS Gel Buffer. The SDS gel buffer was replaced after every sequence of eight runs.

Preparation of SDS-MW Size Standard. SDS-MW size standard was removed from arefrigerator and left at room temperature for 15 min before starting the sample preparation. The standard was thoroughly mixed and briefly centrifuged in a standard microfuge. 10 μL of the size standard was pipetted into a micro vial, and then 85 μL of the sample buffer, 2 μL of the internal standard, and 5 μL of 2-mercaptoethanol were added, respectively. The vial was tightly capped and thoroughly mixed. The mixture was heated in a water bath at 100°C for 3 min in a closed micro vial. The vial was then placed in a room temperature water bath to cool for 5 min before injection.

Protein extraction from pork meat. For this study, pork meat samples were obtained from M. Longissimus dorsi muscle of pigs that lived on a farm near Banja Luka, Bosnia and Herzegovina. The animals were farmed under the same conditions. Before slaughter, they were 6 months old, and their average weight was 110–120 kg. The slaughter was done in an abattoir, under controlled conditions. After slaughtering, the carcasses were cooled to 4°C. The samples for analysis were taken 24 h post mortem and transported to the laboratory under refrigeration. The analysis was carried out immediately after the samples were brought to the laboratory.

The water-soluble proteins were extracted from pork muscles (4 g diluted 1:10 with 0.03 M potassium phosphate buffer, pH = 7.4) at 2°C for 2 min in a homogeniser (Ultraturax, IKA) followed by centrifugation at 5000 rpm for 20 min [19]. The supernatant (sarcoplasmic proteins) was collected for qualitative and quantitative assays. The pellet was washed again by the same procedure. The resulting pellet was then dispersed in 10 volumes of 8 M urea containing 10 ml β-mercaptoethanol per litre, and extracted for 2 min at 2°C in a homogeniser (Ultraturax, IKA) [19]. The homogenate was centrifuged under refrigeration at 5000 rpm for 20 min and the supernatant, containing the myofibrillar proteins, collected for further qualitative and quantitative assays. The sample solutions were filtered using 0.2 μm syringe filters prior to analysis.

Preparation of protein sample. The sample was diluted with the SDS sample buffer for a total 95 μL volume to obtain a final protein concentration range of 1.2 mg/mL to 2 mg/mL. the amount of protein in the sample was estimated by Lowry’s method, using bovine serum albumin (BSA) as a standard. Then 2 μL of internal standard and 5 μL of 2-mercaptoethanol were added. The vial was tightly capped and then thoroughly mixed. The mixture was heated in a water bath at 100°C for 3 min in a closed micro vial. After that, the vial was placed in a room temperature water bath to cool for 5 min before injection.

Protein determination. In order to determine the molecular weights corresponding to the electrophoretic peaks, a calibration curve was obtained using seven proteins in SDS-MW size standard (Beckman Coulter, Inc., Fullerton, CA): uith protein molecular weights of: 10, 20, 35, 50, 100, 150, and 225 kDa. All the proteins were completely separated within 30 min (Fig. 1). The first peak (MT = 12.64 min), corresponding to a 10 kDa protein, was used as an internal standard during the analysis of myofibrillar and sarcoplasmic proteins in pork meat. Within this range, the logarithm of the protein molecular weight is linear with its reciprocal electrophoretic mobility. A standard protein mixture was used to construct a calibration curve (Fig. 2). A regression line was obtained: y (logMw) = 0.088X – 0.0286, R2 = 0.9874. Protein identification was performed by comparing the obtained molecular weights with the relevant data published in the literature [4, 8, 20, 21]. 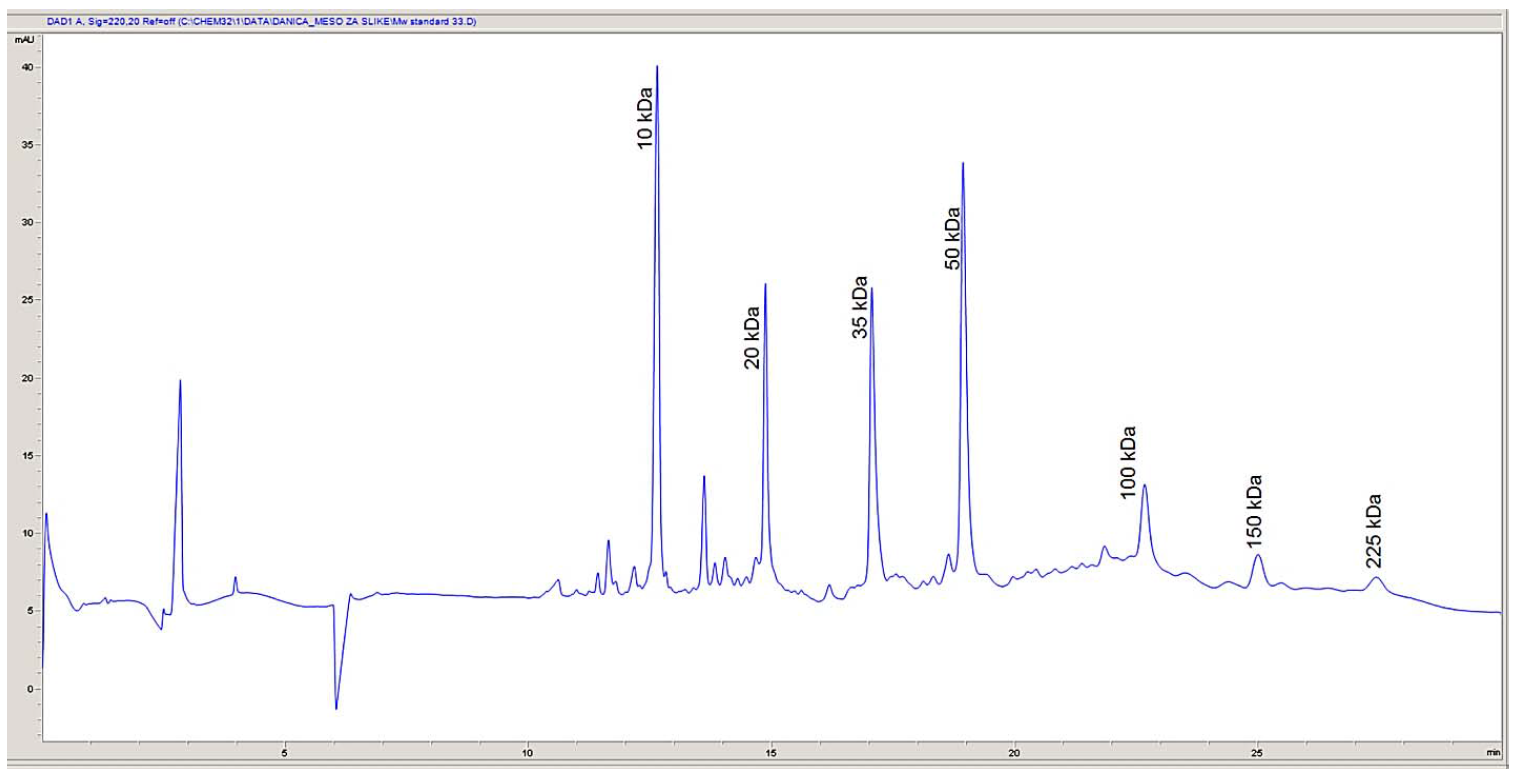 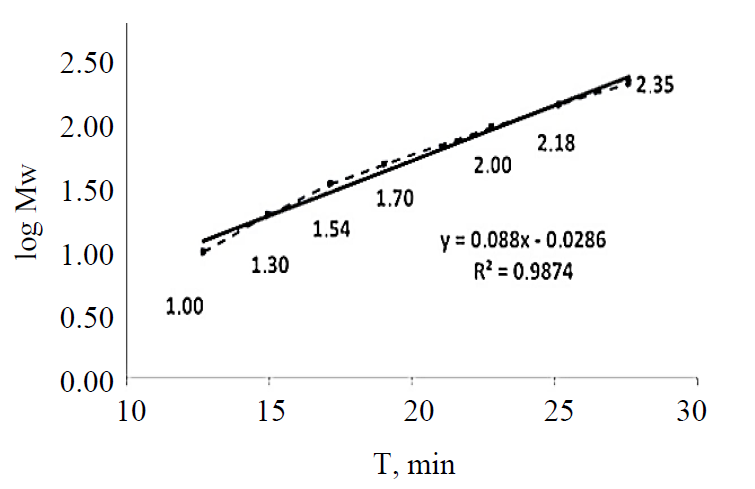 Validation method. The repeatability of the protein separation process from a mixture of known molecular weight proteins was evaluated in seven repetitions. The migration time (MT) and relative concentrations of seven proteins (10, 20, 35, 50, 100, 150 and 225 kDa) are shown together with the standard deviation and coefficient variation in Table 1. The results with good repeatability confirm the coefficient of variation in all the measurements of migration time and relative protein concentration being less than 1.35% and 11.43%, respectively. The obtained data were used to identify the separated myofibrillar and sarcoplasmic proteins. It should be noted that all the measurements during the test of repeatability were performed by an analyst using the same measurement procedure and the same measuring instrument in the same working conditions.

There are many proteins in the meat that differ in their chemical and physical characteristics and functions performed in the muscles of living animals and in the meat post mortem [22]. The electropherograms of myofibrillar and sarcoplasmic proteins separated by SDS-capillary gel electrophoresis (SDS-CGE) are shown in Fig. 3. 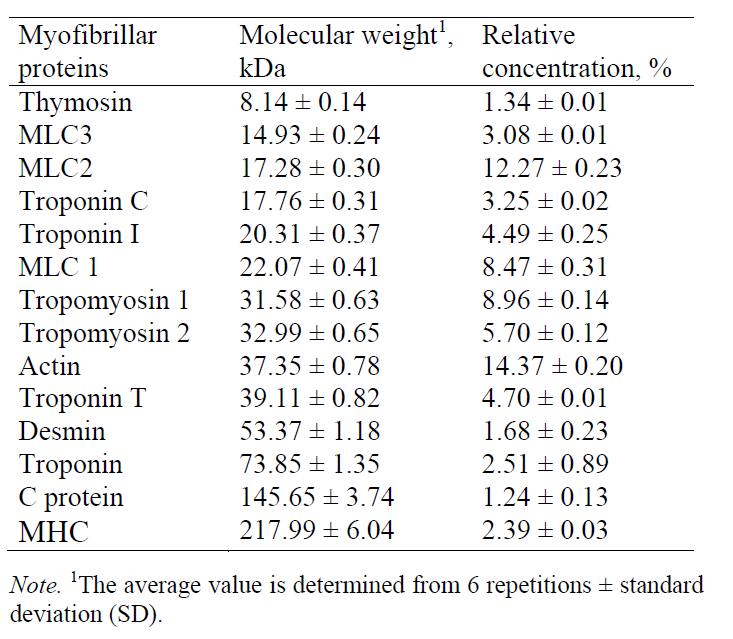 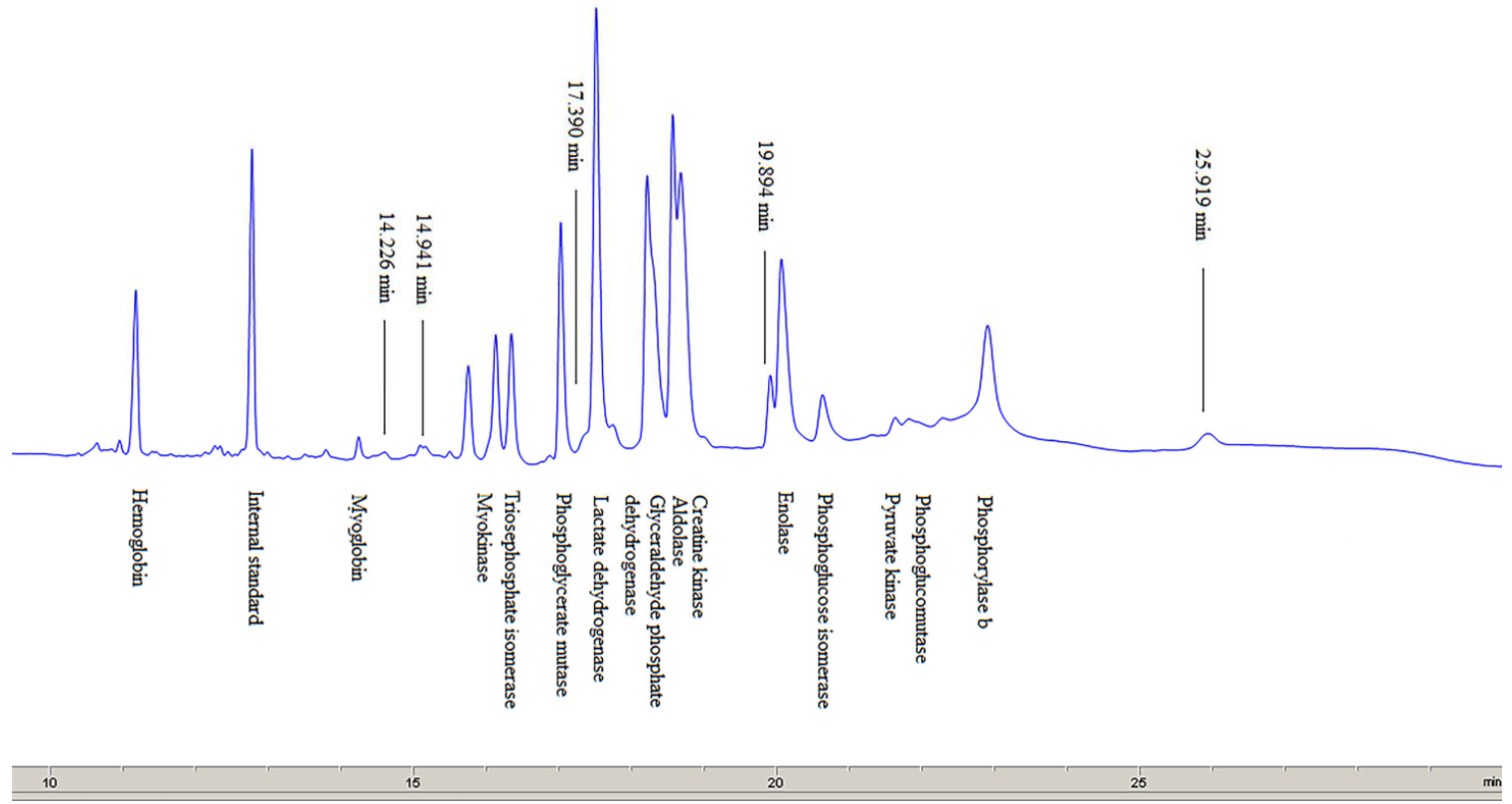 In addition to the identified sarcoplasmic proteins, a few   more   peaks   (with   a   migration   time   of 14.23 min, 14.94 and 17.725 or 17.390 min) may be observed in Fig. 4. They are likely to be enzymes with a low concentration in the sarcoplasm in pork meat, or they might represent low molecular weight products, resulting from the degradation of myofibrillar proteins. Marino et al. [23] reported that these peaks represented the following proteins: myosin light chain-1 (MLC-1), myosin light chain-2 (MLC-2) and tropomiozin-2. Several authors have studied changes in protein composition of extracts obtained during meat ageing [24], after applying certain meat processing technologies [25], and also to identify or analyse the type of meat in the mixture [1, 9]. Gallego et al. [8] cite molecular weights of multiple sarcoplasmic and myofibrillar proteins, calculated by nLC-MS/MS.

Capillary gel electrophoresis (CGE) is used to separate, identify and quantify proteins in pork meat as well as determine molecular weights of separated myofibrillar and sarcoplasmic proteins, ranging from 10 kDa to 225 kDa. After the separation of proteins by capillary gel electrophoresis, the electropherograms contained 53 peaks of myofibrillar proteins and 56 peaks of sarcoplasmic proteins.

The results obtained in this work are in agreement with the values obtained from the curve for standard protein solutions and with the bands obtained using the classic gel electrophoresis methods.

The advantages of capillary gel electrophoresis (CGE), which justify its recommendation for practical application, include the separation rate, the repeatability of the results, and a simple procedure for determining the content of myofibrillar and sarcoplasmic proteins in meat qualitatively and quantitatively.

The authors declare no potential conflict of interest.

Analysis of myofibrillar and sarcoplasmic proteins in pork meat by capillary gel electrophoresis. Foods and Raw Materials, 2018, vol. 6, no. 2, pp. 421-428