In 2012, the General Assembly of the World Health Organization (WHO) adopted the Global action plan for the prevention and control of noncommunicable diseases 2013–2020, supported by the health ministers of all the member states. It promoted the idea that people’s health is determined not only by working conditions, but also by social and anthropogenic factors.

Today, Russian people consume too many simple carbohydrates and animal fats and not enough fruits and vegetables. The lack of dietary fiber contributes to various diseases, including diabetes, colon cancer, hernia of the oesophageal opening of the diaphragm, obesity, and gallstone disease. A sufficient amount of dietary fiber helps prevent dental caries and reduces the level of cholesterol in the body. Dietary fiber is involved in metabolic processes, controls gastric emptying, binds heavy metals and carcinogens and excretes them from the body [1].

Dietary fiber can be produced from beet pulp – a by-product from the processing of sugar beet at sugar factories and table beet at canning factories [3]. Beetroot is a good source of dietary fiber that is used as a dietary supplement in various food products [5, 6].

Beet pulp is the cheapest pectin-containing raw material [7]. There are over 130 pulp drying stations at sugar factories in the CIS (Commonwealth of Independent States) countries. Their total capacity is 10 000 t of dried pulp per day. Thus, with an average yearly operation for 100 days, they can produce at least 800 000 t of dried pulp per year [8].

The cell walls of sugar beet pulp contain such dietary fibers as cellulose, hemicellulose, and pectin substances [9]. These compounds bind together, forming a so-called “pectin and cellulose complex” in a plant cell. However, there are no conditions for their detoxification properties to fully manifest, since their functional groups – involved in complexation (binding) reactions and ion-exchange processes – are difficult to access [10, 11].

Cellulose is an insoluble dietary fiber with almost no functional groups allowing for the sorption of heavy metal ions during complexation. Due to its mechanical detoxification properties, cellulose sorbs mainly high molecular weight compounds.

It seems worthwhile to recover pectin substances separately from cellulose, when destroying the pectin and cellulose complex, to release the functional groups of their molecules. Since they manifest different binding activity with respect to heavy metal ions, as well as different detoxification properties, it is advisable to obtain a combined detoxicant from these substances.

A number of studies, both in Russia and abroad, have aimed to optimise the production of dietary fiber with detoxification properties from beet processing byproducts.

A method of gradual ethanol precipitation of sugar beet pectin from an acidic extract was offered by [17, 18]. The procedure was developed to purify sugar beet pectin from a pectin-containing aqueous extract. Five fractions with different chemical and molecular characteristics were obtained by gradually increasing the concentration of ethanol in the precipitating medium from 50 to 80%. The analysis of chemical and macromolecular characteristics of the fractions indirectly showed that the ability of pectin to dissolve in the ethanol-water binary mixture strongly depended on the polymer structure. The fractions rich in neutral sugars were precipitated at relatively high concentrations of ethanol, probably due to increased interaction between pectin chains and solvent molecules. The authors found that gradual ethanol precipitation was more selective in relation to pectin’s structural features and surface properties than single-stage ethanol precipitation.

The effect of pH on the ethanolic precipitation of sugar beet pectin was studied by [21]. Sugar beet pectin was precipitated from a purified extract in a 75% ethanol solution at an initial extract pH (I-pH) ranging from 2.0 to 4.5. The authors studied the effect of I-pH on pectin yield and pectin-cation interactions. The lowest pectin yield was obtained by precipitating the acidic pectin extract with ethanol at I-pH 4.5. Pectin yield increased to a maximum value as I-pH decreased from 4.5 to 3.0. The results indicated that decreased electrostatic repulsion between pectin chain segments enhanced pectin chainchain interactions, thereby improving the precipitation effect. A decrease in pectin yield was observed as I-pH decreased below 3.0. The cation content of various samples was measured by high-performance cationexchange chromatography in order to determine the content of pectin-bound cations during precipitation. The cation content and degree of cation binding were measured for pectin precipitated at I-pH 3.0, 2.5, and 2.0. The results revealed that a decrease in pectin yield accompanied a decrease in cation-pectin interactions. This suggested that the precipitation of beet pectin substances from an aqueous extract involved complex interactions between cations, solvent molecules, and pectin chain segments. The larger precipitation effect observed with divalent ions, compared to monovalent ions, might be due to enhanced inter-chain interactions between pectin molecules, probably via the formation of intermolecular bonds.

Most developments in this field offer ways to increase dietary fiber yield from raw materials. Fewer studies aim to develop technologies for improving its complexing capacity, which is becoming increasingly relevant today.

Important risk factors for many diseases include disturbed nutrition, lack of macro- and micronutrients, exposure to antibiotics, and a wide range of chemical and biological contaminants in food. Metabolic disorders are increasingly being treated with food products, including specialised foods containing soluble and insoluble dietary fibers [22].

In order to fight disease and promote health, we need to develop scientifically based approaches to obtaining functional ingredients with high detoxification and sorption activity.

This study aimed to develop a technology for obtaining combined dietary fibers using electrophysical methods and evaluate their detoxification properties.

The study objects were samples of pectin substances and combined detoxicants obtained from beet pulp.

The dry powders and their profiles were identified by IR-Fourier spectrometry on an Agilent Cary 660 spectrometer. The infrared spectra were interpreted using [23].

The microstructure of the samples was determined using an XSP 10-640x microscope with a MOV-1-16x ocular micrometre.

We determined the binding capacity of dietary fibers by the trilonometric method with some modifications. In particular, 30.0 cm3 of a working 0.1 M lead acetate solution was poured into a 250 cm3 conical flask, to which 25.0 cm3 of the model solution was added. After being held in an AVU-6s shaker, the mixture was divided into fractions with a TsLM 1–12 centrifugal apparatus. The precipitate was washed in distilled water until it had a negative qualitative reaction to lead ions with potassium bichromate. The centrifugate and the wash waters were combined and mixed with distilled water to reach the mark in a 250 cm3 flask. An aliquot of 10 cm3 of the solution was titrated with 0.01 mol/dm3 ethylene diamine tetraacetate (EDTA) solution at pH 9–10 using Eriochrome Black T until the colour changed from violet to blue.

The binding capacity was calculated as a metal binding percentage using the following equation:

where A1 is the total metal mass, g; A2 is the remaining metal mass in the solution, g. A1 and A2 in Eq. (1) were calculated using the results of the titrometric tests as:

Figures 1–4 show the results of identifying the profiles of the combined detoxicants and pectin substances obtained from beet pulp. The absorption bands of carbonyls in carboxyl groups were analyzed in the IR spectra of the samples.

As shown in Figs. 1–4, the absorption intensity varied in the spectral range of 800–4000 cm–1 depending on the type of dietary fiber and the method of its preparation. The bands in the range of 100–1200 cm–1 did not show such a dependence. The absorption bands for the valence vibrations of carboxyl group carbonyls were in the range of 1695–1710 cm–1; those for ester groups, in the range of 1720–1740 cm–1. Beet pectin substances had a large content of hydrolysed ester compounds, while combined detoxicants had a prevalent content of carboxyl group carbonyls, which presumably indicated their increased ability to form complexes.

Figure 5 shows the microstructure of the combined detoxicant obtained from beet pulp using our technology. 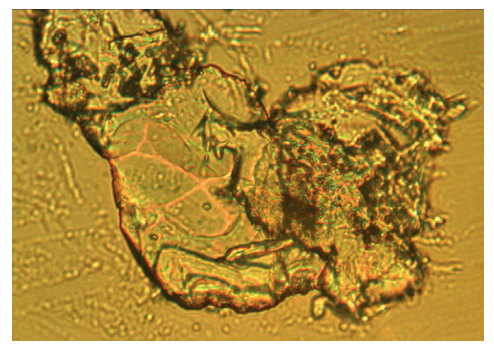 As we can see, the combined detoxicant had a voluminous porous structure with wide and narrow fragments and twisted zones. Unlike it, pure pectin (Fig. 6) and cellulose solutions had a monotonic structure and a weakly pronounced character. 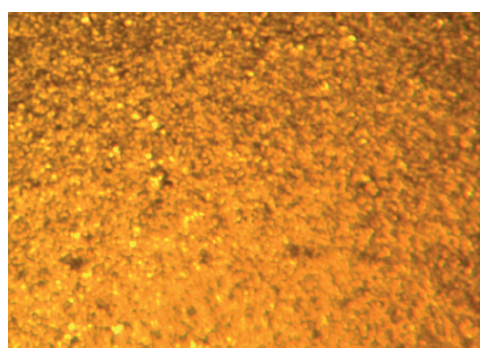 The high complexing capacity of cellulose may be due to the maceration of plant tissue under the influence of an electromagnetic field, high temperature and pH, which makes it more accessible to metabolic processes. Another factor could be the presence of residual amounts of pectin substances.

Figure 7 shows the complexing capacity of a combined detoxicant with respect to lead ions (Pb2+) depending on its qualitative and quantitative composition. 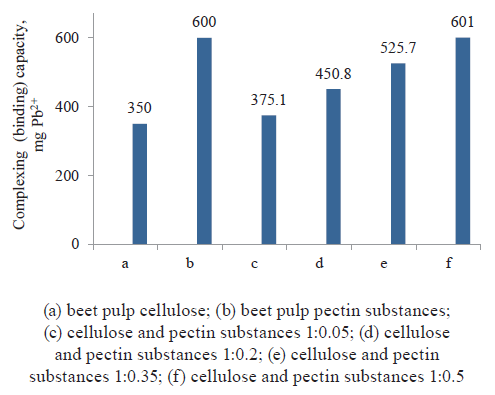 The increase in binding capacity could be explained by the following factors. The presence of pectin in the combined solution let to a slight decrease in the pH of the medium. As a result, it destroyed cellulose micelles and released individual macromolecules, facilitating access to free hydroxyl groups involved in complexation.

The microstructure of the dispersion system during the interaction between the combined detoxicant and lead acetate solution is shown in Fig. 8. 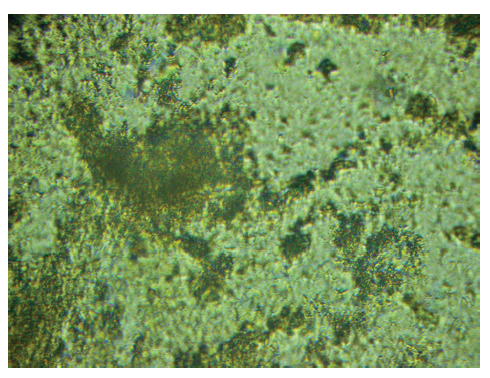 We assumed that the dark areas of various sizes could indicate the presence of agglomerates resulting from the complexation of lead and active groups of pectin substances and cellulose contained in the combined detoxicant.

Based on the experimental results, we developed a technology for producing combined detoxicants from beet pulp. The process parameters are presented in Table 1. 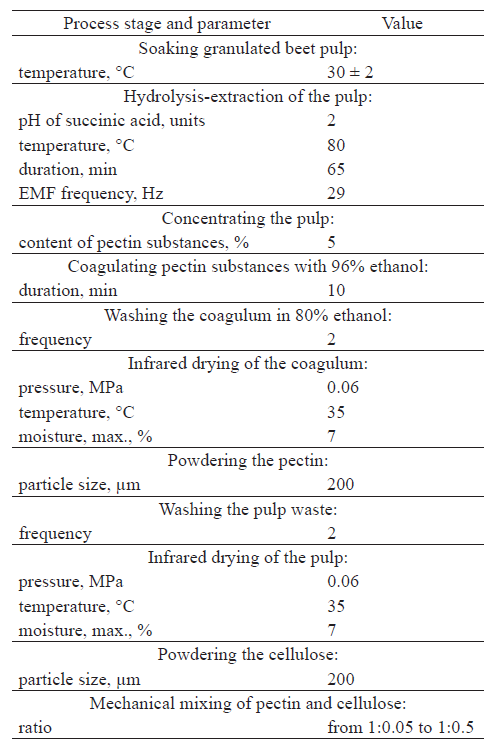 As a result of the studies, we developed a technology for obtaining combined dietary fibers from beet pulp using the electrophysical method and evaluated their detoxification properties.

The experiments established that 1:0.5 was the optimum ratio of cellulose and pectin substances in the combined detoxicant to ensure a high complexing capacity.

The authors declare no conflict of interest.

This work was financially supported by the Russian Foundation for Basic Research (RFBR) (project No. 18-016-00173).