Thermal properties of commercial hydrobionts’ tissues in the freezing process

The paper describes changes in thermal properties in the process of freezing of marine raw materials. The study objects were the skin of giant octopus (Octopus dofleini L.), pallium of Pacific squid (Todarodes pacificus L.), milt of Pacific herring (Clupea pallasii L.), a nd muscle t issue of Japanese c ucumaria (Cucumaria japonica L.). The mathematical relations of the studied thermal parameters allowing the calculation of specific heat capacity, thermal conductivity coefficient and tissue density of the studied objects in the process of freezing were obtained. It was found that the change in the total specific heat capacity during the freezing of all the objects under study was of the same type: first, this figure increases due to the intensive ice formation in the tissues of hydrobionts, and then decreases due to a significant decrease in the content of the liquid aqueous phase. The values of the total specific heat capacity before the freezing of seafood were determined (kJ/kg·K): 4.26 for squid, 3.58 for milt of Pacific herring, 3.66 for octopus skin, and 3.95 for the shell of cucumaria. It was revealed that an increase in the amount of frozen out water decreased the density of samples of frozen raw materials. This was due to the high (77.4–88.9%) content of water, turning into ice, which has a lower density index. The values of hydrobionts’ tissue density before freezing were obtained (ρ0, kg/m3): 1226.74 for squid, 1209.6 for milt of Pacific herring, 1128.55 for octopus skin, and 031.26 for shell of cucumaria. It was established that the thermal conductivity of the hydrobiont tissue samples in the process of freezing increased with the growth of the proportion of frozen out water contained, approaching the thermal conductivity of ice. The calculated values of thermal conductivity coefficient of seafood tissue prior to freezing equal (W/m·K): 0.52 for squid, 0.47 for milt of Pacific herring, 0.63 for octopus skin, and 0.53 for cucumaria. The obtained thermal characteristics values of the objects studied are recommended for use in technical and technological calculations of aquatic biological resources cooling treatment processes.

Although containing a number of nutrients in their composition, some parts of commercial hydrobionts are not widely used in food production, thus being wasted while processing. These include octopus skin, which makes up to 37% by weight of raw material and is rich in caratinoids, collagen, taurine, selenium, high-limit fatty acids [1–4]. Processing of Pacific herring produces rarely used now milt (up to 12.4% by weight of raw materials), which contains nucleoproteins, including biologically active substances (deoxyribonucleic acid and ribonucleic acid), and polyunsaturated fatty acids, including ω-3 and ω-6 families [5]. Among other insufficiently used raw materials, sources are the Pacific squid and Japanese cucumaria [6, 7]. However, these commercial objects provide sources of such biologically active substances as complete protein, hexosamines, chondroitin sulfate, triterpene glycosides, and polyunsaturated fatty acids [3, 8–10]. Getting with food in the human body, they slow down the aging process and have a corrective effect on metabolic processes, thus improving the quality of life and promoting longevity.

Cryotechnology is a promising trend in the industrial processing of biologically highly valuable raw materials. The method allows obtaining concentrates with highly preserved natural properties and biological activity [11–13]. Since the resulting cryopowders, as a rule, have the properties of biologically active additives, they are often used as biological correctors in the production of various food products and cosmetic materials, also being included in formulation compositions [14–18].

There are three main processes in cryogenic processing of raw materials of animal and plant origin: cryopreservation, cryogenic grinding and freeze drying. Cryopreservation consists in rapid freezing of raw materials to a much lower than cryoscopic temperature, when most of the water turns into ice. It not only suppresses the activity of enzymes and the vital activity of microorganisms, but also creates favorable conditions for easier destruction of tissues during subsequent cryogenic grinding [11, 19]. By now, the process of freezing fish as a method of preservation has been widely studied, but there is lack of data on lowtemperature processing of non-fish commercial objects. Also lacking are data on seafood thermal properties in the course of low-temperature processing. However, this knowledge is necessary when performing engineering calculations of processes and equipment related to cryogenic processing.

In this regard, the aim of the paper was to study the changes in thermal properties in the process of freezing raw materials of marine origin. Total specific heat capacity, thermal conductivity coefficient and density were calculated for the selected objects of study.

The amount of water in the samples, being the main factor of the freezing process, was determined by the standard method according to State Standard 7636-85 [20].

The standard software package of Microsoft Office 2007 and CurveExpert 1.4 were used for statistical data processing and graphs plotting with formula derivation.

Consider the body of the study object as a twocomponent mixture containing W parts of water and (1–W) parts of dry substances with corresponding specific heat capacities for each component cw and cd.s. Heat capacity of the product in the temperature range before ice formation is determined by the expression:

Since at negative temperatures part of the water ω in the object under study transforms into ice, whose heat capacity is ci , the heat capacity of the frozen raw material cfrm is calculated by the formula:

When freezing, the heat of ice formation will be removed from the mass unit at a lower temperature, which is defined a

If temperature change of one degree is adopted in the expression (3), the amount of heat will receive the dimension and meaning of the component of the specific total heat capacity and be recorded as:

The sum of calculated heat capacity of the frozen raw material cfrm and the heat of ice formation qw will give the total specific heat capacity:

Considering raw materials as a two-component mixture containing parts of water W and (1–W) parts of dry substances with respective thermal conductivity coefficients of λw and λd.s, the heat capacity of the product in the temperature range before ice formation is determined by the expression:

The coefficient of thermal conductivity can be calculated by the formula based on the models of Krisher [5]:

where λi is thermal conductivity of ice coefficient within the temperature range 273–208 K (2,22 W/m•K);
εp – porosity coefficient which depends on the amount of frozen out water and chemical composition.

Porosity coefficient of the assumed structure will be determined by the expression:

where ρi is ice density, kg/m3;
ρw is product density before freezing, kg/m3;
m is mass fraction of dry substances in raw materials.

Taking into consideration stable weight fraction of dry substances in the process of freezing, and practically unvarying density ρm

Frozen raw material density determination. Consider the body of the object under study as a threecomponent mixture consisting of unfrozen water, ice, and dry matter. Density of the samples can thus be presented as the equation [6]:

Data on water content determination in the tissues of the studied hydrobionts are given in Table 1.

The objects under study have a high water content ranging from 77.4% (in the milt of Pacific herring) to 88.9% (in the muscle tissue of the Japanese cucumaria), which corresponds to the known data [2, 3, 7, 24]. 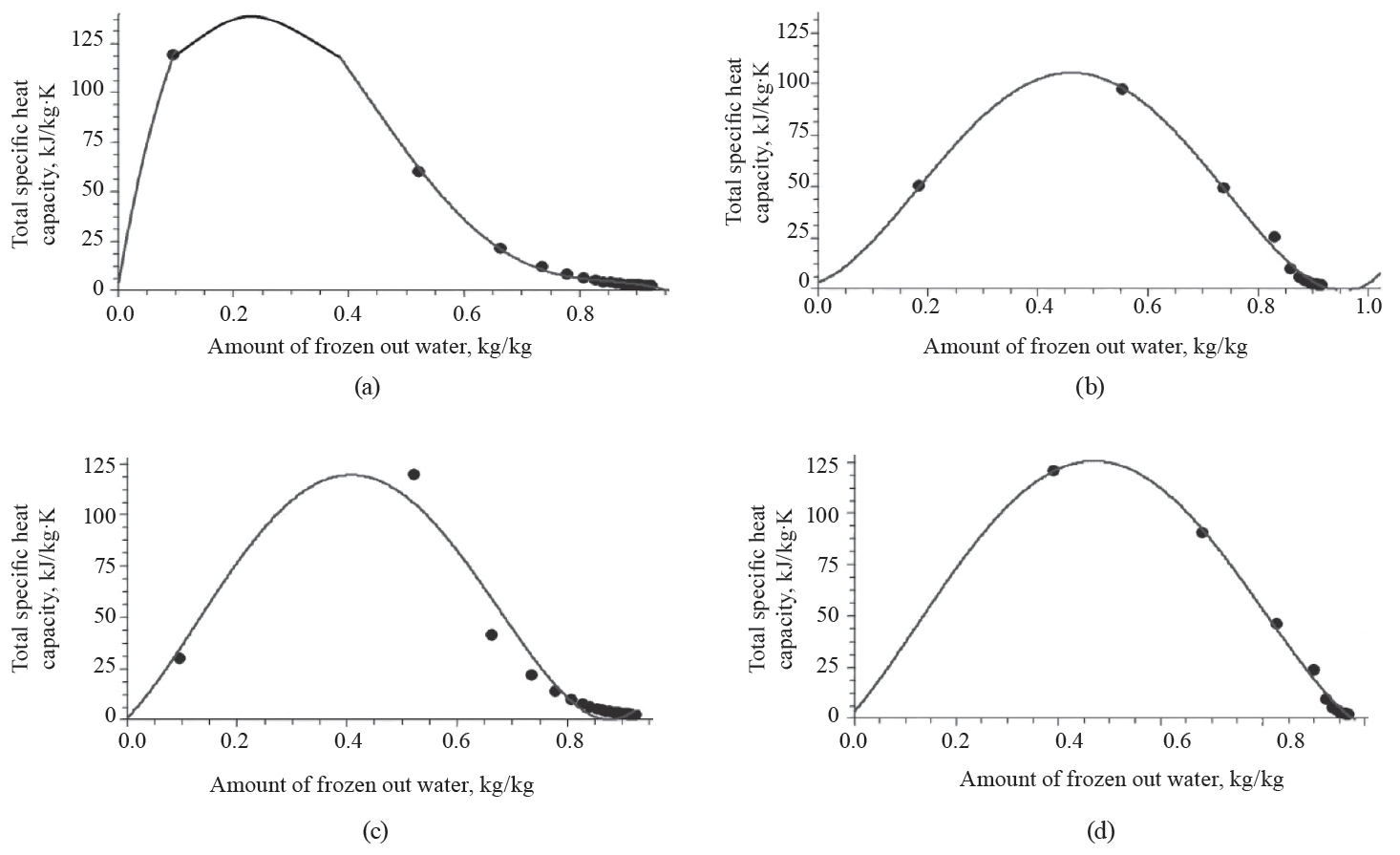 Fig. 1. Relation between total specific heat capacity and the amount of frozen out water: (a) pallium of Pacific squid; (b) milt of Pacific herring; (c) octopus skin; (d) Japanese cucumaria

Approximating the curves shown in Fig. 1 with Curve Expert Professional 2.3, we get the formulae:

These formulae can be used to calculate the relation between total specific heat capacity and the amount of frozen out water for the studied raw materials with a correlation coefficient of 0.99. The free term in the obtained formulae determines the value of total heat capacity of the raw material with the amount of frozen water equal to 0. Therefore, total specific heat capacity of non-frozen seafood equals (kJ/kg·K): 4.26 for squid, 3.58 for milt of Pacific herring, 3.66 for octopus skin, and 3.95 for cucumaria shell. The values of heat capacity of non-frozen raw materials calculated, based on the standard formula (1) were as follows (kJ/kg·K): 4.06 for squid; 3.52 for milt; 4.05 for octopus skin; and 3.93 for cucumaria. The difference between the data obtained according to formulae (11–14) and (1) is 4.9, 1.7, 9.6, and 0.5% for squid, milt, octopus skin, and cucumaria, respectively. This indicates the adequacy of the derived mathematical relationships.

Using formula (7), we calculated the coefficient of thermal conductivity of the selected raw material and plotted the relation to the amount of frozen out water (Fig. 2). 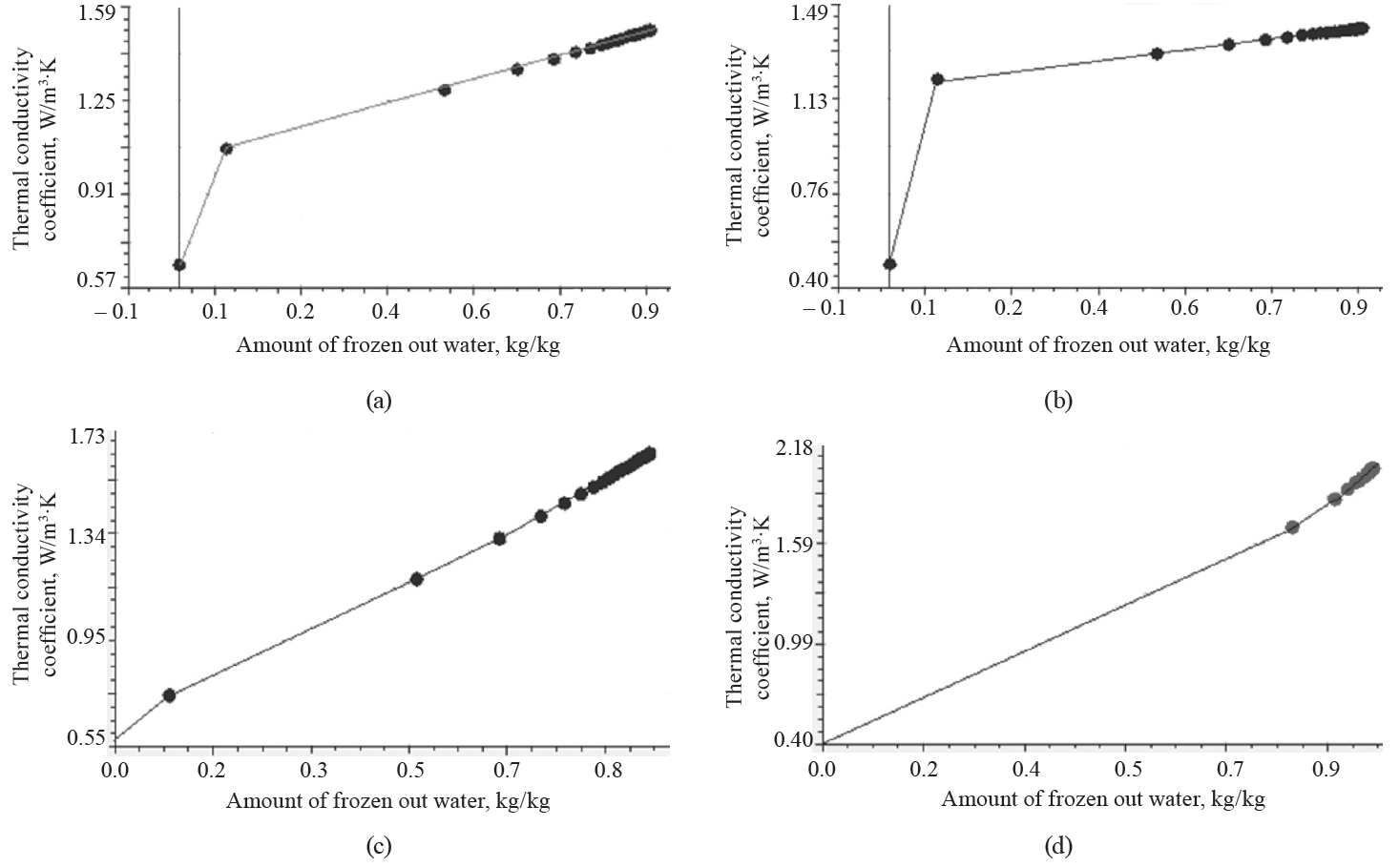 Fig. 2. Relation between thermal conductivity coefficient and the amount of frozen out water for: (a) squid trunk; (b) milt of herring; (c) octopus skin; (d) cucumaria

Formula (10) helps calculate the density of raw materials in the process of freezing and construct graphs of the relation between density and the amount of frozen out water (Fig. 3). 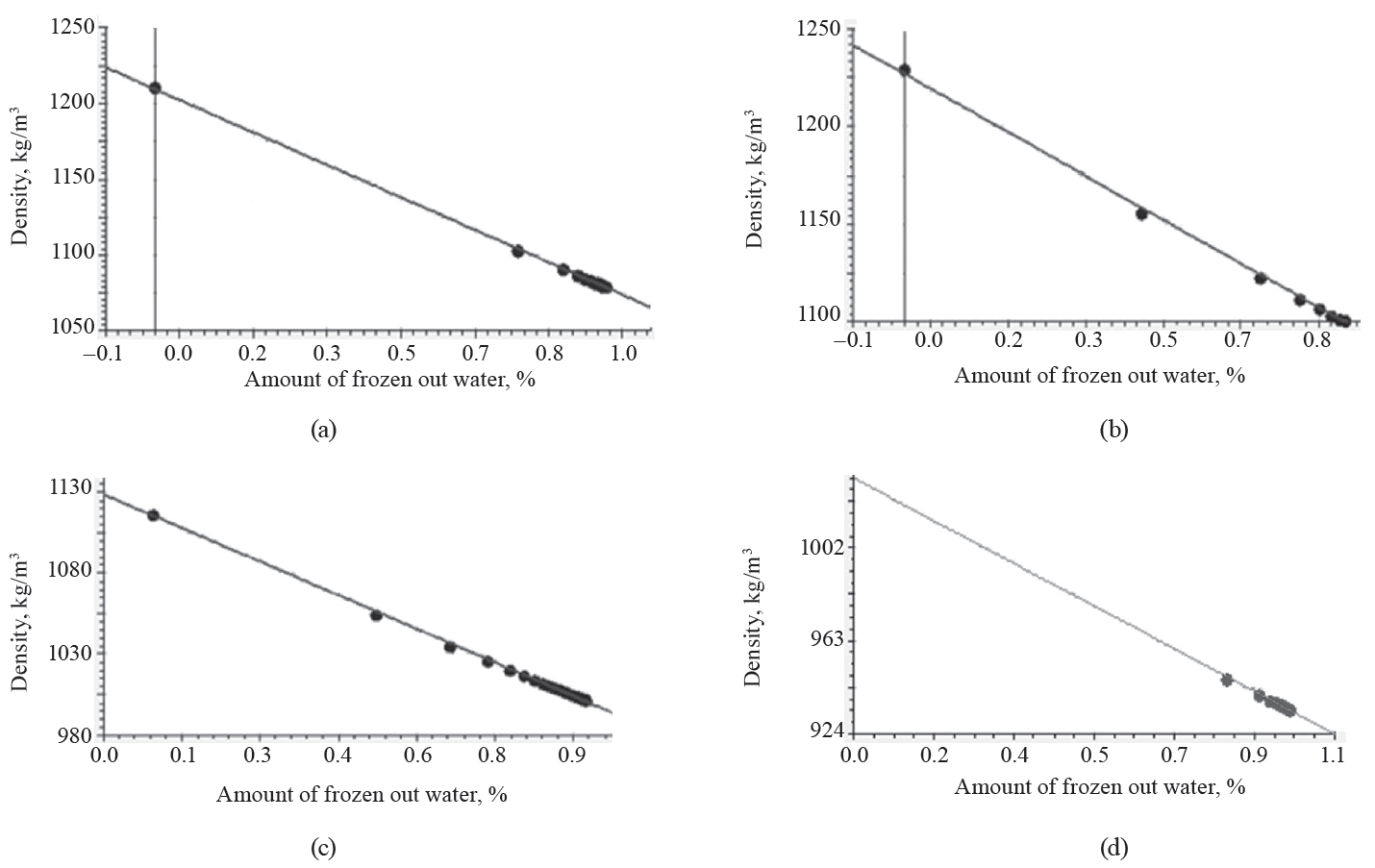 Fig. 3. Relation between the density and the amount of frozen out water for: (a) milt of Pacific herring; (b) pallium of squid; (c) octopus skin; (d) cucumaria shell

Analysing the graphs in Fig. 3 it should be noted that the considered relations are of the same type and close to linear. Density of frozen raw materials is reduced with the increase in the amount of frozen water. This happens due to the high water content in the studied objects. Water turns into ice which has a lower density index. Approximating data curves with the help of Curve Expert Professional 2.3, we get the formulae:

The derived formulae (19–22) can be used to calculate the relation between the density of herring milk of the Pacific, squid trunk, octopus skin, cucumaria shell and the amount of frozen out water with a correlation coefficient of 0.99. The results of calculations show that the decrease in the density of the studied hydrobionts’ tissues during freezing, when the amount of frozen out water reaches, for example, 90% makes up for squid – 11.9%, milt – 9.0%, octopus – 11.0%, and cucumaria – 8.4%. It is known that during freezing the density of Atlantic mackerel muscle tissue decreases by 9.3% [23].

Thus, studies of changes in thermal properties in the process of freezing Pacific squid, milt of Pacific herring, giant octopus, and muscle tissue of Japanese cucumaria were undertaken.

It was found that during freezing the change in total specific heat capacity of all the objects under study is of the same type: first, this figure increases due to the intensive ice formation in the tissues of hydrobionts, and then decreases due to a significant decrease in the content of the liquid aqueous phase in the objects under study. The transition point from growth to fall corresponds to the values of the amount of frozen water close to 50%.

The relation between the density index of hydrobionts’ tissues in the freezing process is also close to linear. With the increase in the amount of frozen out water the density of the frozen raw material decreases, since the samples under study have a high content of water turning into the ice, which has a lower density index.

The obtained mathematical relationships of the studied thermophysical parameters also allow us to obtain the values of specific heat capacity, thermal conductivity and tissue density of fresh and chilled hydrobionts prior to freezing, when the amount of frozen out water equals zero.

The obtained digital values of total specific heat capacity, thermal conductivity, and density can be used by specialists for calculation, modeling and design of basic and derivative processes of non-fish commercial hydrobionts low-temperature processing, as well as refrigeration and process equipment.

The authors declare that there is no conflict of interest related to this article.