Abhari Khadijeh a
,
Ramezani Houra a
,
Pilevar Zahra a
,
Hedayat Hosseini a
,
Mohammadi Abdorreza a
Affiliation
a Food Sciences and Technology Department, National Nutrition and Food Technology Research Institute, Faculty of Nutrition Sciences and Food Technology, Shahid Beheshti University of Medical Sciences, Tehran, Iran
Copyright ©Abhari et al. This is an open access article distributed under the terms of the Creative Commons Attribution 4.0. (http://creativecommons.org/licenses/by/4.0/), allowing third parties to copy and redistribute the material in any medium or format and to remix, transform, and build upon the material for any purpose, even commercially, provided the original work is properly cited and states its license.
DOI: http://doi.org/10.21603/2308-4057-2020-1-107-114 Foods and Raw Materials, 2020, vol. 8, no. 1, pp. 107-114

To reduce the adverse effects of red meat and artificial additives on human health, one can reduce the consumption of red meat or processed meat products. However, studying possible ways to reduce the harmful effects might be as effective as limiting consumption levels. Nitrite/nitrate salts are usually added to meat products to guarantee their safety, since these salts inhibit the growth of Clostridium botulinum and prevent heat-resistant spores from producing toxins. Moreover, nitrite/nitrate salts improve the color, flavor, and aroma of the finished product and postpone lipid oxidation processes [1].

In spite of the numerous advantages, an excessive intake of nitrite can produce adverse effects on human health. Nitrite can be transformed to a nitrosating agent (NO+), which reacts with biogenic amines and creates carcinogenic N-nitrosamines. Bacterial and meat enzymes cause decarboxylation of free amino acids, which leads to the formation of biogenic amines. Several intrinsic and extrinsic factors, e.g. salt content, can also affect the biogenic amine formation level [2–4].

In meat and meat products, carcinogenic N-nitrosamines are usually formed under acidic conditions caused by the electrophilic reaction between a nitrosating agent, e.g. nitrite or nitrous acid, and secondary/tertiary amines that result from protein and lipid degradation [5]. The mechanism of nitrosamine formation in meat products has been thoroughly studied. Nitrosamines with generic chemical structure of R2NN = O are produced under certain conditions of low pH, high temperature, and presence of some reducing agents associated with processing and composition of a particular meat product [6]. There are several hurdle technologies that can reduce the concentration of nitrite required to inhibit bacterial growth, e.g. ascorbic/erythorbic (isoascorbic) acid and essential oils, certain processing conditions, or various non-thermal methods [1, 7]. Exposure level of N-nitrosodimethylamine (NDMA) compound via consumption of food and beverages was estimated to be 0.09 and 0.1 μg/day in the Netherlands and Germany, respectively [8, 9]. The level of these compounds in nitrite-preserved meat products varies significantly. It depends on the ingoing volume of nitrite, meat quality, and fat content, as well as on processing, ripening, and storing conditions. There have been many reports on nitrosamines detected in processed meat products [10, 11].

The research objective was to examine the safety of emulsion-type cooked sausages available on the Iran markets by assessing the contents of residual nitrite, ascorbic acid, and nitrosamine. In addition, we also studied the effects of processing conditions and related factors on these compounds to provide information for health professionals and food manufacturers.

Residual nitrite determination. The nitrite content was evaluated during 28 days on days 0, 7, 14, 21, and 28 using slightly modified calorimetric method of AOAC method no. 973.31 [12]. The samples were cut into pieces and homogenized. An aliquot of about 2.5 g of minced sausage was added to 5 mL of saturated borax and 25 mL of deionized water (> 70°C) in Falcon tubes. After stirring and cooling in room temperature, 1 mL of each Carrez solution (I and II) was added to each sample and adjusted to the volume of 50 mL. Carrez solution I was prepared by dissolving 10.6 g of ferrocyanide in distilled water (100 mL) according to the method introduced by Ramezani et al. [13]. Carrez solution II was also made by mixing 21.9 g of zinc acetate with acetic acid (3 mL) and adjusted to the volume of 100 mL using distilled water. After centrifugation at 4000 rpm for 5 min (HeltichRotorfix 32A), 25 mL of supernatant was transferred to a 100 mL tube. Ten ml of sulfanilamide reagent and 6 mL of dilute HCl were added to the supernatants and kept in the dark for 5 min. Then, 2 mL of naphtyl-ethylenadiamine solution was added to obtain high intensity azo dyes. The samples were kept in the dark for 10 min to achieve complete reactions. Absorbance was measured at 538 nm.

The present research featured samples from seven most popular types of sausages in Iran. The selected sausages differed in the amount of nitrite, ascorbic acid, and nitrosamine. This difference is associated with the variations in concentration of added nitrate and nitrite salts (sodium and potassium), storage conditions, and different pH values [15, 16]. Following the EU legislations, 2006/52/EC directive limited the usage of nitrite to 150 mg per 1 kg of meat. However, the national laws in Iran are more restricting. Iranian provisions allow for maximum 120 mg of nitrite per 1 kg of meat (ppm) in sausages [17]. Table 1 displays the residual nitrite, ascorbic acid, and nitrosamine contents in the meat samples under study during storage.

Figure 1 illustrates the results of nitrite content changes (mg/kg meat) in the meat samples obtained from factory B as representative of all the four meat factories.

Figure 1 Residual nitrite content (mg/kg meat) in sausages with different meat content from factory B on days 0, 7, 14, 21, and 28

As it was expected, the amount of nitrite residue in meat products of all four meat factories decreased during 28 days of refrigerated storage. The increase in meat content increased the reduction rate of sodium nitrite in the products. In other words, lower residual nitrite content was detected in high content meat samples. The highest reduction rate of nitrite content was observed in chicken and beef salami (90% of meat). On the first day of refrigerated storage, the Frankfurt sausage (40%) and both beef and chicken sausages (55%) contained 80 μg/kg of nitrite.

The detected amount exceeded the level permitted by Iranian laws as defined by the Institute of Standard and Industrial Research of Iran (ISIRI). The maximum permissible burden of nitrite is 66 and 63 μg/kg for processed meat products with 40% and 55% of meat content, respectively. The concentration of nitrite was higher than the expected levels even after 28 days of storage. However, the residual nitrite content was not exactly equal to the initial added nitrite. First, it was partly degraded by heating process. Second, it decreased when ascorbic acid was applied to the meat product during the heating process to accelerate conversion of nitrite to nitric oxide.

The nitrite content varied due to interaction with heme-containing components, non-heme proteins, and fat tissues, conversion to nitrate, production of such gases as N2, CO2, and NO, and nitrosamines [18]. Therefore, residual nitrite was associated with meat content due to different contents of myoglobin [19]. As a reactive agent, nitrite converts to nitrite oxide and forms nitrite-heme-nitrosomyoglobin complex with myoglobin, thus producing nitrosomyochromogen. The latter is responsible for the characteristic bright pink color of cured meat products [20].

Hence, higher content of myoglobin results in lower nitrite content in the final meat product. The results obtained by statistical analysis indicate that residual nitrite in Frankfurt sausage (40%) was significantly higher (P < 0.05), whereas in beef salami (90%) it was at its lowest. No significant differences were observed in other sausage and salami products (P > 0.05).

Ascorbic acid, or ascorbate, is applied to meat products as an additive with high water solubility for three major reasons. First, the nitrosomyoglobin-forming reduction of nitrite to nitric oxide produces the required color. Second, the antioxidative activity of ascorbic acid slows down oxidation of pigments and lipids, which results in color and flavor stability. Third, residual nitrite decreases due to binding to nitrite in heated samples [21].

Ascorbate proved effective in nitrosamine inhibition. This quality is associated with rapid reactions of ascorbate with nitric oxide compared to nitrosating agents, e.g. amines. Therefore, nitrosamines are formed when the reaction rate constant of ascorbate is not much larger than amines [16]. Figure 2 and Table 1 demonstrate that ascorbic acid content of samples decreased significantly (P < 0.05) during refrigerated storage. 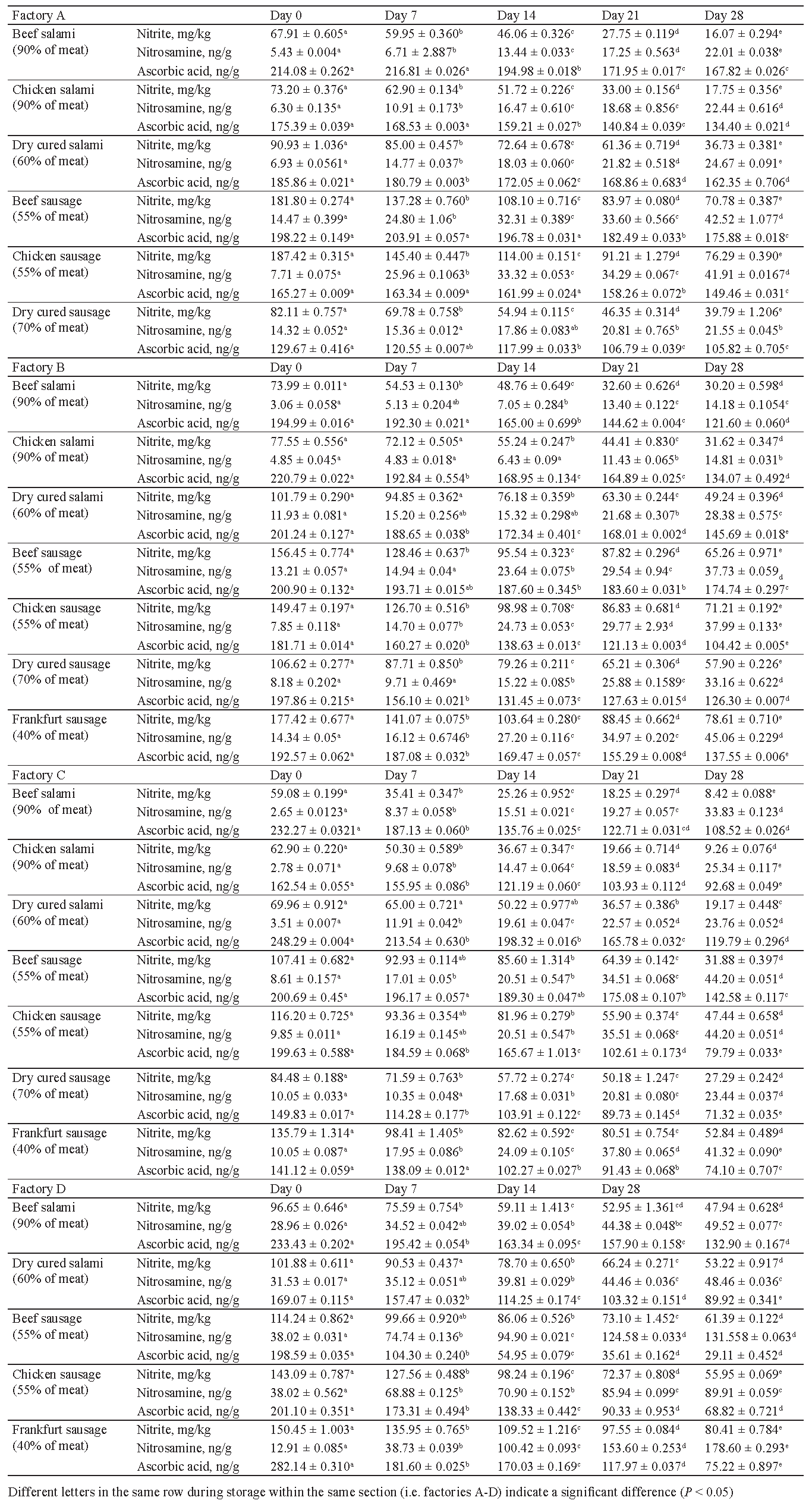 The obtained results showed an increase in nitrosamine content of samples during refrigerated storage. However, it was not significant in all samples (Fig. 3).

The nitrite reduction rates in the sausages with a smaller diameter, e.g. Frankfurt sausage, appeared significantly lower (P < 0.05) than in the samples with a bigger diameter, e.g. salami. This difference can be explained by the longer cooking time for salami (5–6 h) compared to Frankfurt sausages (3–4 h), which is associated with a higher reduction rate of residual nitrite. According to the results, the total volatile nitrosamine level of Iranian meat products with lower meat contents was generally higher than that of samples with high meat contents. The nitrosamine content in meat products was associated with the added nitrite and the residual nitrite [25]. The residual nitrite is a reactive agent that can be reduced by heating treatment or exposure to such meat components as proteins, lipids, and pigments [26, 27].

Figure 4 shows that there was a significant correlation between the amounts of added nitrite and the nitrosamine contents in beef salami (90%) samples from all four meat factories.

In this study, the correlation factor was 0.9, which asserts the effects of added nitrite and also residual nitrite contents on nitrosamine formation in the processed meat product. Therefore, the products with lower meat content showed higher residual nitrite and, consequently, a greater nitrosamine formation. In meat products, presence of nitrosating agents increases the concentration of nitrosamine, whether grouped in NO2 related agents, e.g. N2O4, or grouped in nitrous acid derivatives, e.g. N2O3 and HNO2 [28].

There are several suggested strategies to reduce nitrosamine formation in meat products to improve their healthy status and safety. The present research clarified that the levels of nitrosamines in the samples depended on the amount of residual nitrite, ascorbic acid, pH, and cooking temperature. Higher levels of residual nitrite were detected in the samples with a lower amount of meat, compared to those with a higher amount of meat.

Further research is needed to identify new substances that could replace nitrites, as well as factors that reduce the required amount of nitrite in meat products.

The authors declare that there is no conflict of interest regarding the publication of this article.

We would like to thank National Nutrition and Food Technology Research Institute for the financial support.

This research was financially supported by National Nutrition and Food Technology Research Institute (NNFTRI) of Iran.

Download
Contents
Abstract
Keywords
Introduction
Study objects and methods
Results and discussion
Conclusion
Conflicts of interest
Acknowledgements
Funding
References
Foods and Raw Materials uses cookies. By continuing to use the portal, you agree to the storage and use of cookies by the portal and partner sites on your device.
Manage files