Introduction. Sockeye salmon (Oncorhynchus nerka L.) is a valuable Pacific salmon. Sockeye heads are a significant share in processing sockeye salmon. Traditionally, fish by-products are used to make fishmeal. However, due to the high content of collagen proteins and fat in sockeye salmon heads, it is difficult to produce fishmeal from this raw material. Controlled enzymatic or combined hydrolysis allows protein, fat, and minerals to be extracted to supply the market with higher value products with desirable features. This research was aimed to analyse the chemical composition and biological value of hydrolysis products obtained from sockeye heads. Study objects and methods. We investigated hydrolysis products of sockeye salmon heads, namely protein hydrolysates, fat and sludge. Thermal hydrolysis and enzymatic-thermal hydrolysis were used for the tests. Thermal hydrolysis was realized in reactor. For enzymatic-thermal hydrolysis, the raw material was pre-treated by proteolytic enzyme Alcalase. The hydrolysates obtained were investigated. Chemical composition was determined in accordance with State Standard 7636-85. HPLC was used for molecular weight and amino acid analysis. Gas chromatography was used for fatty acid analysis. Biological value of proteins was determined by the balance of the amino acid composition comparing it with the “ideal protein model”. Results and discussion. Thermal hydrolysis resulted in the production of protein hydrolysate powder with protein content of 92.0% dry matter and a protein recovery rate of 39.6%. Combined hydrolysis resulted in the production of protein hydrolysate powder with protein content of 92.6% and a protein recovery rate of 83%. All protein hydrolysates contained all essential amino acids. The biological value of protein hydrolysate obtained by thermal and combined hydrolysis was 80.1 and 82.8%, respectively. Conclusion. Hydrolysed products obtained by thermal and enzymatic-thermal hydrolysis had a valuable chemical composition and could be recommended for food and feed use.

The average total annual sockeye salmon harvest worldwide is 140–180 thousand tons [4]. Sockeye salmon (Oncorhynchus nerka L.) is a valuable Pacific salmon. It is about 60 cm long with an average weight of 2 to 4 kg. In the Russian Far East, when processing sockeye salmon, by-products (heads, spines, etc.) account for about 25% of the total weight, which is about 10 thousand tons a year [5]. By-products have a valuable chemical composition, but only about 20–30% of the total amount is used to produce fishmeal.

One of the hardest parts to process is the sockeye salmon head, which, on average, accounts for 14.8– 17.9% of the total fish weight and 67–69% of the total waste amount. Sockeye salmon heads contain a high amount of collagen proteins (26–38% of the total mass of proteins), fat (15–18% of the total weight), and mineral substances (3.8–5.1% of the total weight) [6]. When cooking such raw materials, a colloidal emulsion mass with increased viscosity forms, which is hard to separate and dry. Therefore, final products do not meet the standard requirements for fishmeal, including in terms of physical characteristics, water and fat contents, while fat is rapidly oxidized, which leads to intoxication and product damage [7]. These semi-finished products cannot be used as food.

To use the valuable biological potential of sockeye salmon heads, hydrolysis methods were proposed that make it possible to separate fractions from organic raw materials – proteins and peptides, fats and fatsoluble compounds, mineral compounds with water insoluble protein components [8]. Mild hydrolysis makes it possible to preserve the valuable chemical composition of each fraction, and hydrolysis products can be recommended even for food purposes. Chemical hydrolysis (acidic or alkaline) damages certain essential amino acids, so waste water purification is necessary because of the high concentration of chemical components [9].

This research proposed and investigated two different hydrolysis, thermal and enzymatic-thermal. These two methods allow for deep hydrolysis of the complex protein-lipid-mineral system of sockeye salmon heads with maximum preservation of valuable amino acids and unsaturated fatty acids. Thermal hydrolysis is based on using high temperatures and pressure in an aqueous medium. Enzymatic-thermal hydrolysis includes pre-treatment of raw material with proteolytic enzymes followed by thermal hydrolysis [10]. Depending on the hydrolysis method and its parameters, it is possible to produce protein products with a different amino acid composition and molecular weight, fatty products with different fractional lipid composition, as well as protein-mineral or mineral-protein by-products from sludge with different biological values. The content of these biologically active substances predetermines the uses of the final products of hydrolysis.

Frozen sockeye (Oncorhynchus nerka L.) heads were provided by LSC Ozernovskiy fish cannery factory № 55 (the Kamchatka region, Russia) in September 2016. In plastic boxes, they were delivered by plane within 24 h to the laboratory and then stored in a freezer at –18°С for one week until tests. Sockeye was caught in the southwestern part of the Kamchatka Peninsula, in one of the largest spawning grounds of sockeye salmon in the world [11].

Chemical composition of sockeye heads was determined in accordance with State Standard 7636-85. The mass fraction of fat was determined in previously dried samples by extraction with diethyl ether according to the Soxhlet method. Nitrogen content was determined by the Kjeldahl method using a UDK 127 analyzer (VELP Scientifica, Italy) with pre-burning of the samples in sulfuric acid in the presence of hydrogen peroxide and mineral catalyst.

Thermal and enzymatic-thermal hydrolysis. Hydrolysis tests were carried out at the technology company ANiMOX (Adlershof, Berlin, Germany). Defrosted sockeye heads were minced and subjected to thermal and enzymatic-thermal hydrolysis. Hydrolyzed mixture was cooled down and separated by centrifugation into three fractions: protein, fat and sludge (protein-mineral or mineral-protein byproducts). The aqueous fraction (water-soluble proteins) was freeze-dried to produce a protein hydrolysate. The sludge was subjected to convectional drying to obtain a protein-mineral or mineral-protein product.

Thermal hydrolysis (T-hydrolysis) of minced raw materials was realized in a reactor for 60 min at 130°С and pressure 0.20 MPa (pH 7.0). After hydrolysis, the organic mixture was separated using a centrifuge at 3500 rpm for 10 min.

During enzymatic-thermal hydrolysis (ET-hydrolysis), the raw materials were at first treated by proteolytic enzyme Alcalase 2.5 L (Novozymes) for 6 h at 50°С and 130 rpm (pH 8.0). Minced raw material was mixed with hot water at a 1:1 ratio. Subsequent fractionation was carried out by centrifugation with parameters described above for T-hydrolysis.

Molecular weight distribution. The molecular weight profile of protein hydrolysates was estimated by the SEC method on a Merck/Hitachi HPLC system (detection UV 213 nm) with a Phenomenex Yarra SEC-2000 column (300×7.8 mm). Degassed 0.1 M potassium phosphate buffer with pH of 6.8 was used as a mobile phase. Ten microliters of the previously prepared material with 0.45-micron pore size filtered sample at a concentration of 0.2–0.3% dry matter was used for each measurement. Calibration was carried out in triplicate using the BIO-RAD Gel Filtration Standard 151-1901. The mean retention time and molecular weight were plotted on a half-logarithmic scale. The linear correlation was used to interpolate the molecular weight ranges under analysis. Accordingly, the sample chromatograms were integrated piecewise between the retention time estimated.

Amino-acid profile. The amino acid profile of proteins was determined at the UBF laboratory (Altlandsberg, Germany) using HPLC after hydrolysis of proteins in 6 N boiling hydrochloric acid for 48 h. O-phthalaldehyde was used for derivatization. HPLC detection was performed using Agilent 1200 Series G1379A for UV-detection, G1312A for fluorescence detection, and G1329A for diode-array detection.

where BV is biological value of the analyzed protein, %.

Sockeye heads are a valuable raw material with great amounts of useful components.

After thermal hydrolysis the protein fraction contained 92% of protein of dry matter. The fat was dry matter accounted for 100%. Rates of protein and fat extraction were 39.6% and 86.8%, respectively. 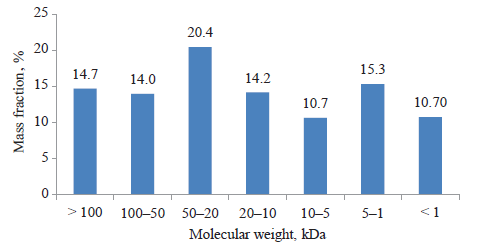 After ET-hydrolysis, the protein fraction contained 92.5% of protein based on dry matter. The dry matter of fat accounted for 100%. Protein extraction rate was 83.0%, and the rate of fat extraction was 88.1%. ET-hydrolysis demonstrated a significantly increase in the extraction degree of biologically active protein and fat components from sockeye heads and a decrease in by-products compared to T-hydrolysis. 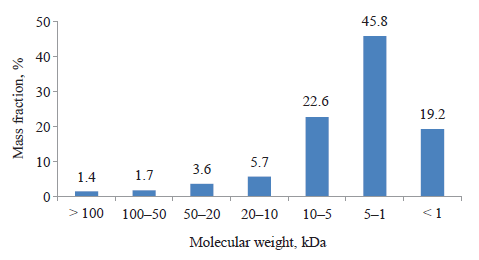 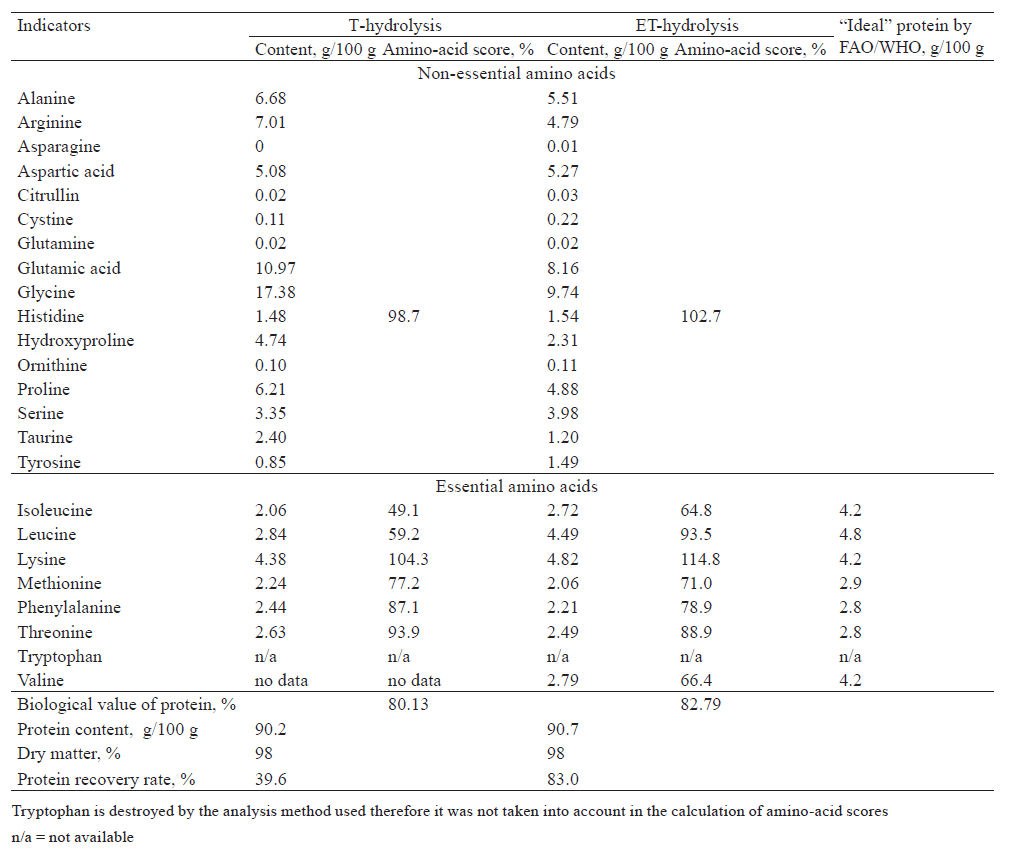 In comparison with the market product Amizate made in Norway out of salmon raw materials the protein hydrolysate have similar amino acid profile, especially after ET-hydrloysis [14]. This shows a high utilization potential of the Russian salmon fish by-products. 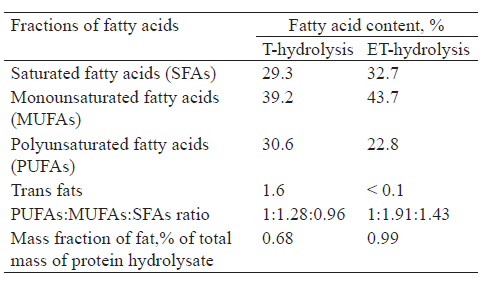 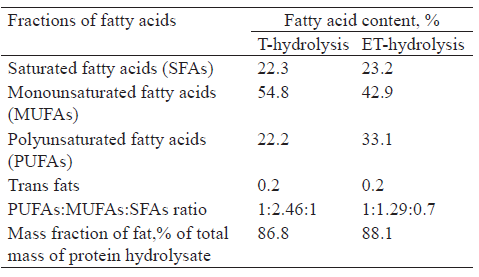 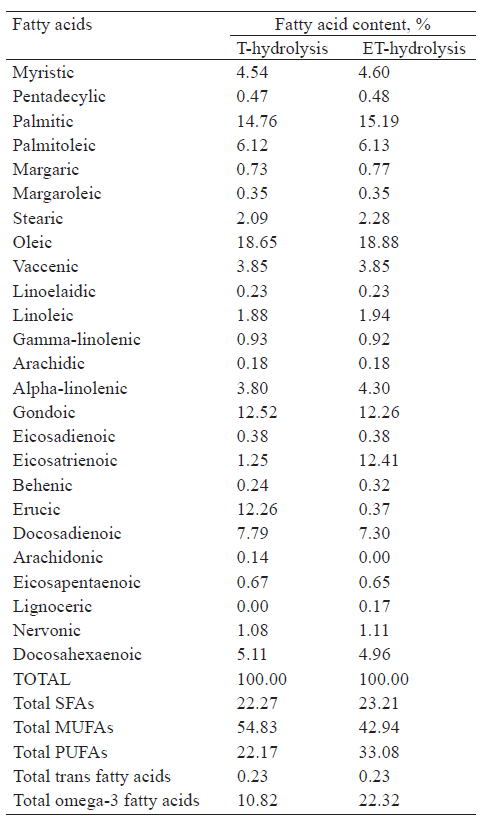 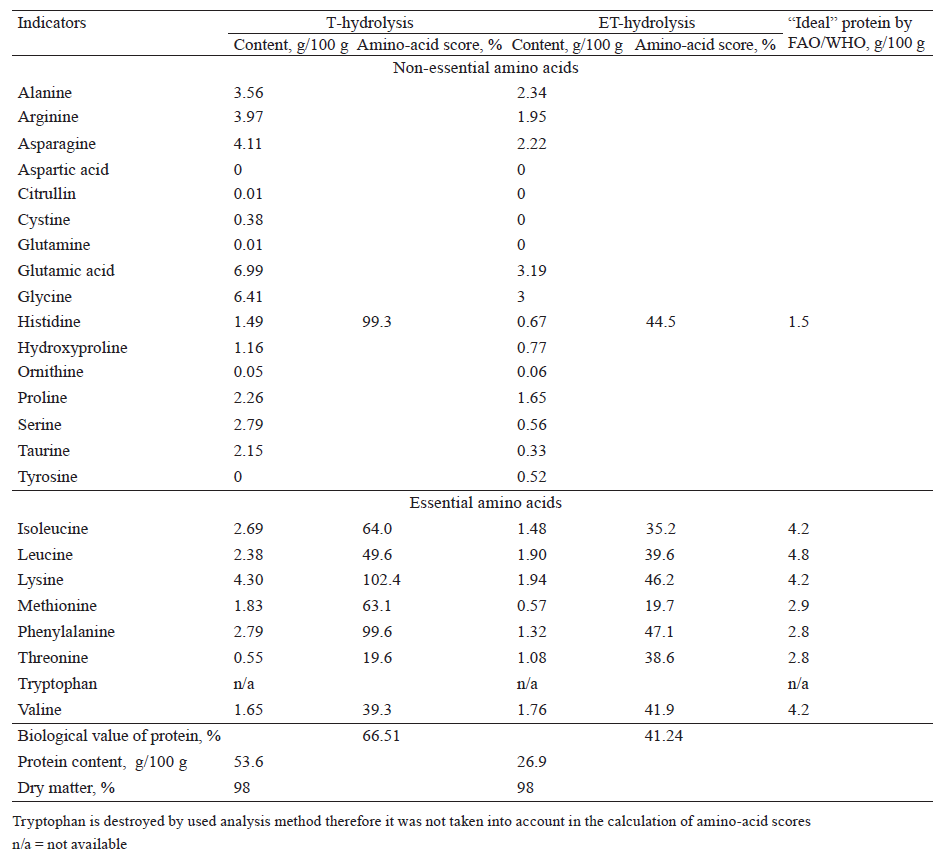 These by-products contained all the essential amino acids but their contents were lower than in protein hydrolysates including glutamic acid and glycine. The biological value of the protein-mineral product after T-hydrolysis was much higher than that one of mineral-protein product after ET-hydrolysis (66.51% vs. 41.24%). This can be explained by the fact that during ET-hydrolysis there is a deeper splitting of the protein chains and their transition into a soluble state is more intense therefore non-hydrolyzed proteins in the sludge contain less essential amino acids. The biological value of protein-mineral and mineral-protein products was much lower than that of protein hydrolysates. 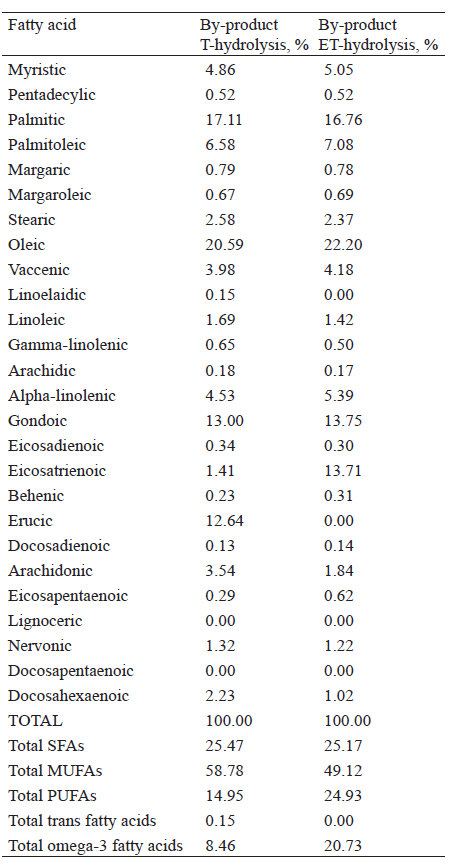 The data showed a difference in the content of polyunsaturated fatty acids and omega-3 fatty acids in fat and byproduct fractions. In the by-products, this content was lower, especially of docosahexaenoic acid. This means that high-temperature treatment, sedimentation, and contact with mineral substances of the sedimentary part led to the fat quality deterioration but demonstrated pretty good fatty acid composition.

Thermal hydrolysis, which is simpler and faster, allowed 39.6% of protein to be extracted from raw materials in the form of protein hydrolysate with a protein content of 92%. The protein fraction with a molecular weight of more than 20 kDa accounted for 49.1%, and less than 10 kDa, 36.7%. The fat extraction rate of lipids into fish oil was 86.8%. In the proteinmineral by-product, protein content was 53.6%, mineral content was 29.4% and fat content was 15.9%, with protein recovery rate of 60.6% and mineral recovery rate of 91.1%. Thermal hydrolysis resulted in a more balanced amino acid and fatty acid composition compared to enzymatic-thermal hydrolysis.

Enzymatic-thermal hydrolysis is more laborintensive but made it possible to extract 83% of protein from raw materials in the form of protein hydrolysate with a protein content of 92.6%, which in terms of the amino acid and fatty acid balance exceeded similar products after thermal-hydrolysis. The fraction of proteins with a molecular weight of more than 20 kDa accounted 6.7% and with that of less than 10 kDa, 87.6%. The fat extraction rate was higher than during thermal hydrolysis, with 88.1% of lipids. The resulting protein-mineral by-product had a reduced biological value in terms of amino-acid and fatty acid composition compared to the by-product obtained by thermal hydrolysis.

The high nutritional value of all three products after thermal and combined hydrolysis allows them to be used as food and feed additives – sources of valuable amino acids, fatty acids and minerals. These additives should be used for nutritional purposes separately or as components of food products (bakery and confectionery products). For feed purposes, hydrolysis products are recommended to be introduced into the composition of fish, farm animals and poultry feed.

Additionally, there is a possibility of using unrefined small underutilized fishes with lower fat content through hydrolysis processing in novel food technologies to obtain protein products with high biological value [19]. Further research should be done in this field as well. Furthermore, combination of fish hydrolysates with plant origin protein and anti-oxidant component may improve functional and economic characteristics of new products with high biological value [20, 21].

The authors declare no conflict of interest.