Numerous studies have shown that food production in Russia does not meet the physiological needs of Russian people, especially those in the Extreme North. The northern population, including children, has a severely unbalanced diet, which has been confirmed by extensive epidemiological studies and recent monitoring of nutritional status. Such food patterns result in an increased occurrence of nutritional diseases, lower efficiency, and reduced life expectancy, leading to unjustified social and economic losses. According to the WHO, nutrition accounts for 70% of people’s health and physical development [1].

Using local raw materials and creating an indigenous metabolic type of nutrition can be the fastest and most effective way to improve the diet and eliminate micronutrient deficiencies [2–5].

Enriching foods with functional ingredients is one of the promising directions in this area. Such ingredients can regulate the amount of essential substances in the human body [6, 7].

Of no less importance is the production of combined meat products from indigenous animals with the addition of plant materials with high consumer appeal [8–11].

The objects of the study were meat samples derived from ungulates of various sex and age groups. Nutritional value indicators were determined as follows:

The first stage of the study focused on the amino acid, vitamin, and mineral composition of raw meats. The second stage aimed to develop a sausage technology. 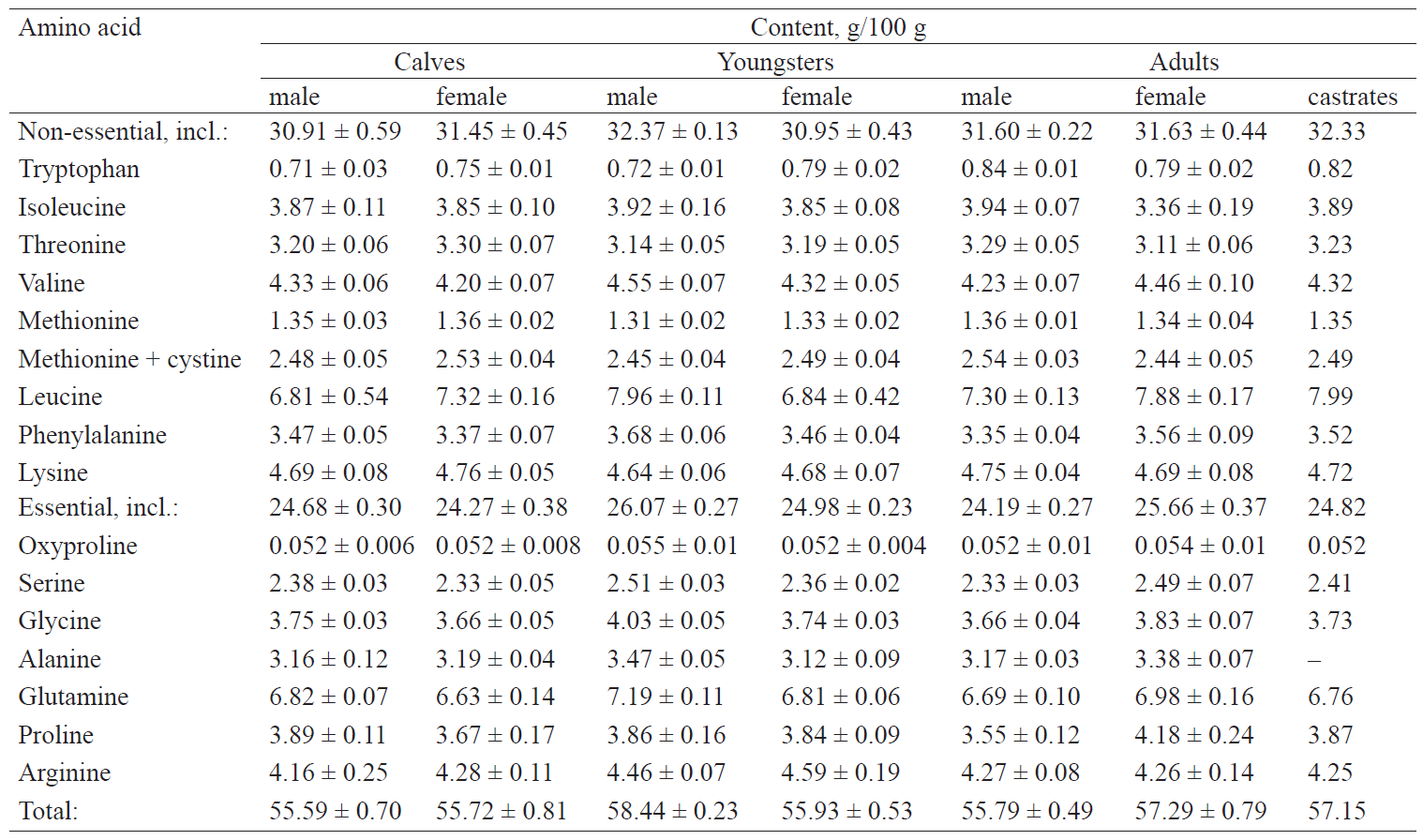 A high content of essential amino acids in reindeer meat makes it a balanced type of raw meat.

In the body, tryptophan is converted into biologically active compounds containing an indole ring (tryptamine, serotonin, and adrenochrome) and a pyridine ring (nicotinic acid, or vitamin PP). Tryptophan is used in treatment of heart disease to control body weight, suppress appetite, alleviate migraine attacks, and reduce the harmful effects of nicotine. Phenylalanine is oxidized to tyrosine. These amino acids are substrates for the synthesis of thyroxine, adrenaline, and noradrenaline. Phenylalanine is involved in the synthesis of collagen and connective tissue. It improves memory, attention, and circulation and contributes to the formation of insulin. Sulphur-containing amino acids are vital biologically active compounds. They are substrates for the synthesis of glutathione, insulin, lipoic acid, vitamin B1, and a number of enzymes.

The fatty acid, vitamin, and mineral compositions of reindeer meat are presented in Tables 2–4.

The comparison of age and sex groups showed that the meat of female calves was richer in vitamins compared to male calves. The adult meats had a higher vitamin content compared to the young meats.

We noted that the content of macro- and microelements in reindeer meat increased with the age of the animals.

Elk meat is rich in phosphorus, potassium, and sodium. Phosphorus is part of organic compounds in phospholipids, nucleotides, and phosphoproteins. It is involved in the metabolism and maintains the acid-base balance in the body. Potassium and sodium are elements of the reticuloendothelial system present in the hydrated layer of bone tissue crystals. They play an important role in maintaining the osmotic pressure of the blood. Elk meat is also rich in iron, a vital part of haemoglobin. It promotes oxygen transfer from the lungs to tissues and performs a catalytic function, participating in redox reactions. In addition, elk meat has a rather high content of zinc and copper participating in many biochemical processes.

Tables 5–8 show the contents of amino acids, vitamins, and minerals, as well as the fatty acid composition of Taimyr elk meat.

We found that Taimyr elk meat had all essential amino acids in the amounts close to the standard. Arginine is a vital component of muscle tissue metabolism. It maintains the optimal nitrogen balance in the body, slows down tumour growth, and stimulates the immune system. The biochemical analysis of elk meat indicated its high biological value.

The results of the vitamin content analysis revealed that among group B vitamins, the highest concentrations were of pantothenic acid and cyanocobalamin.

The mineral composition of elk meat included a variety of minerals that are known to form chelate, ionic, and other biologically active complexes with functional properties. Elk meat contained 85.85% protein, 1.63% fat, and 4.84% ash elements. The calorie content in 100 g of meat was 358.07 kcal (1500 kJ).

We also determined the composition of amino acids, fatty acids, vitamins, and minerals in musk-ox meat. The results are presented in Tables 9–12.

According to the results, the content of essential amino acids in musk-ox meat was slightly higher than that of non-essential acids. Essential acids accounted for 54%.

Tyrosine is a substrate for the synthesis of thyroxine, adrenaline, and noradrenalin. Methionine is a methyl group donor for the formation of many compounds, such as adrenaline, creatine, anserine, choline, and cysteine. In the body, cysteine turns into cysteamine, which mitigates the damaging effects of ionising radiation. Many enzymes owe their biological activity in the body to cysteine present in the molecule of sulfhydryl groups.

We calculated that the ratio of unsaturated to saturated fatty acids in musk-ox meat was about 1.66 : 1.

As seen from Table 10, oleic acid was prevalent in the meat, accounting for 85% of total unsaturated acids.

The analysis showed that musk-ox meat, in the same way as reindeer meat, had a high content of mineral elements such as phosphorus, potassium, and sodium. Of trace elements, musk-ox meat was rich in iron, which is known to be part of many protein and enzyme systems, involved in immunobiological processes. In addition, musk-ox meat had a relatively high content of zinc, which stimulates the immune system and protects the body from infections.

One of the criteria for evaluating a product’s nutritional value is the protein quality index (PQI) – a ratio of tryptophan to oxyproline. This index determines the ratio of muscle and connective tissue proteins. The PQI for ungulate meats is shown in Fig. 1.

As can be seen in Fig. 1, elk meat had the highest PQI compared to the other samples. It was probably due to nutrition patterns of this animal species.

At the next stage, we used the obtained data on the indigenous meats to develop a sausage technology.

Starter cultures were used in the production of dry smoked and cured sausages. Lactic acid bacteria, which are contained in starter cultures, ferment sugar and form lactic acid. The pH of the product decreases to the required level within 24–48 h, creating optimal conditions for sausage firming, reducing microbiological contamination, and rapid uniform drying.

The quality evaluation of the products included the following indicators: microbiological, sensory (appearance, slice colour, aroma, taste, texture, and overall evaluation), and physicochemical (pH, moisture content). We found that introducing a concentrate of starter cultures into coarsely cut meat during salting improves the sensory, colour, physicochemical, structural and mechanical, microstructural, and microbiological parameters of the products, increasing their biological activity.

The ripening of venison products is based on lactic acid bacteria that gradually become dominant and inhibit the development of undesirable microflora. The introduction of starter cultures doubled or even tripled the level of lactic acid microflora in the minced meat. In addition, using starter cultures eliminates the need for cooking meat at high temperatures, thus maintaining the quality of raw meat protein.

The microstructural analysis showed that starter cultures intensified the process of muscle tissue fermentation and, consequently, the structuring of the product. Thus, bacterial preparations can accelerate and stabilise the structural changes of the minced meat.

The decrease in moisture during the production of dry smoked sausages was accompanied by a significant reduction of the bacterial content in minced meat (from 2690 to 140–150 microbial cells in 1 g of product). 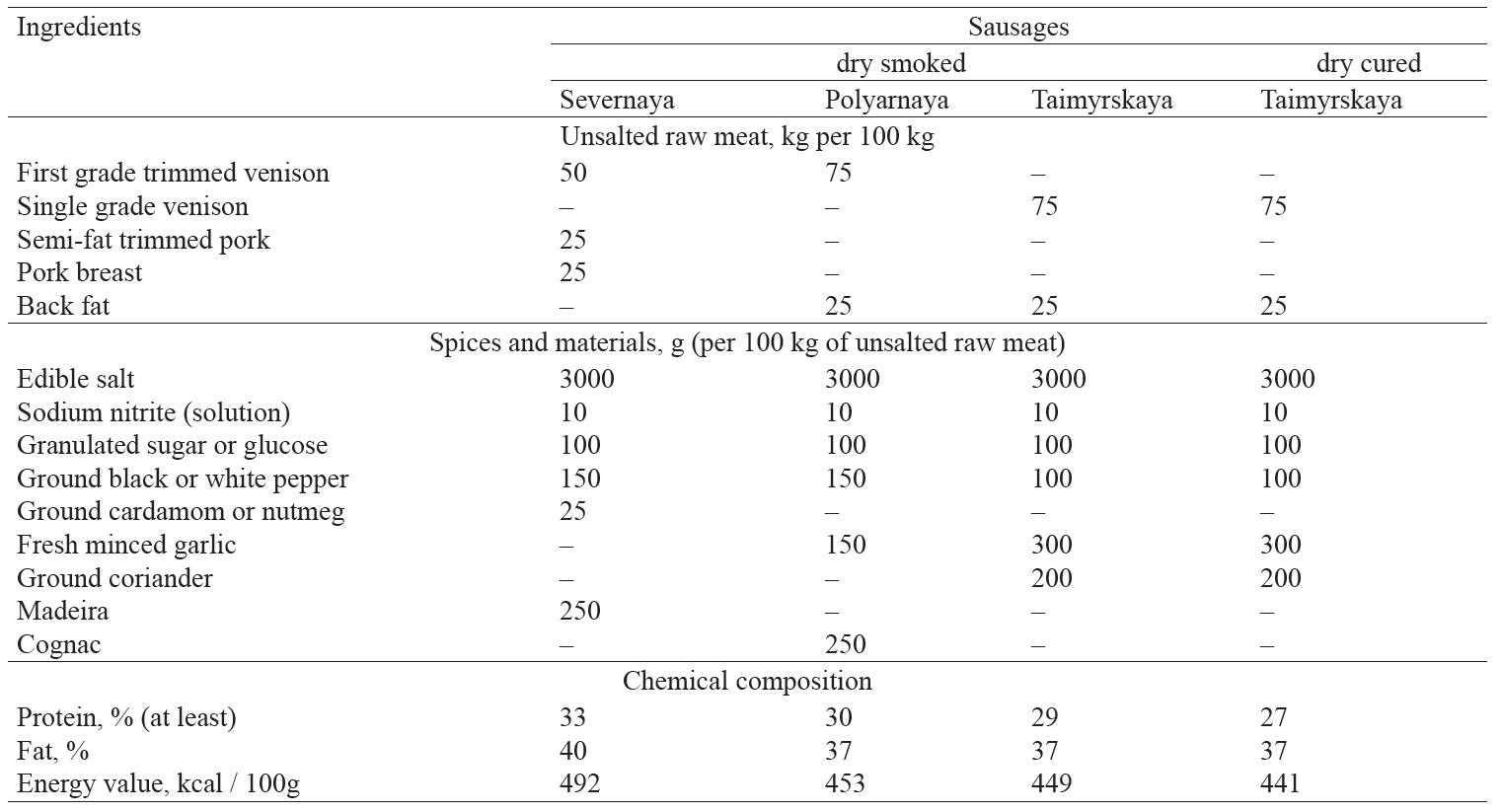 We studied a number of ungulate meats, namely reindeer, elk, and musk-ox meats. According to the results, all the meats contained a whole complex of biologically active substances, including essential unsaturated fatty acids, amino acids, vitamins, and minerals. In addition, the studied raw meats had a balanced combination of vital micronutrients. Therefore, we concluded that the meat of reindeer, elk, and muskox can be used to replenish their deficiency in the diet of people living in the Extreme North.

We also developed the formulation of dry smoked and cured venison sausages with desirable characteristics, including shelf life and sensory attributes.