Kondratenko Vladimir V. a
,
Petrov Andrey N. a
,
Kondratenko Tatyana Yu. a
Affiliation
a Russian Research Institute of Canning Technology, Vidnoye, Russia
Copyright ©Kondratenko et al. This is an open access article distributed under the terms of the Creative Commons Attribution 4.0. (http://creativecommons.org/licenses/by/4.0/), allowing third parties to copy and redistribute the material in any medium or format and to remix, transform, and build upon the material for any purpose, even commercially, provided the original work is properly cited and states its license.
DOI: http://doi.org/10.21603/2308-4057-2021-2-254-261 Foods and Raw Materials, 2021, vol. 9, no. 2, pp. 254-261

Introduction. The functional basis of protopectin complex can be represented as a network of regions that consist of homogalacturonan sequences and a base of rhamnogalacturonans-I, i.e. rhamnosyl-containing branching sites. Enzymatic isolation of these regions is possible only at a certain minimal native degree of polymerization. The research objective was to develop a system of criteria for assessing the potential applicability of the enzymatic transformation of plant protopectin complex.
Study objects and methods. The research featured the polymerization degree of the homogalacturonan regions of the protopectin complex and produced a system of assessment criteria for the enzymatic fragmentation potential of the protopectin complex. The theoretical calculations were based on the values of the mass fractions of rhamnosyl and galacturonide residues in plant cell walls. The result was a new polymerization degree analytical function.
Results and discussion. The ratio of the mass fractions of rhamnosyl and galacturonide residues in the water-insoluble plant tissue served as a dimensionless criterion of applicability. The rational condition for the dimensionless criterion of applicability was based on the fundamental constraint for homogalacturonan regions in the protopectin complex. It was expressed by a fundamental inequation. The rational area for determining the numerical values of the applicability criterion was presented as

. The functional dependence was reduced to a two-dimensional criteria space as “width of rhamnosyl branches vs. the criterion of applicability”, where each pectin-containing raw material was given a single uniquely defined position. The boundary conditions for the criteria space were determined analytically.
Conclusion. The new approach offers an assessment of the enzymatic fragmentation potential of the plant protopectin complex by homoenzyme preparations. The approach is in fact the second stage of the decision tree in the science-based technology for pectin and its products.

The biopolymer complex of plant tissue cell walls is a complex conglomerate of intertwined branched supramolecular networks of the protopectin complex and the hemicellulose. The complex is permeated with cellulose microfibrils and protein extensin (Fig. 1) [1, 2]. All its components are linked to each other by ester, salt, combined, and hydrogen bonds. Each component possesses valuable physicochemical properties with a good potential for food industry [3–7]. 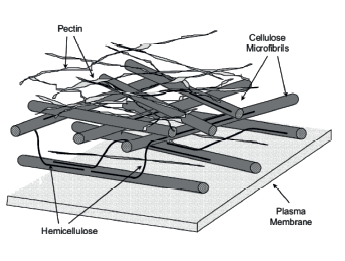 Pectins have the most attractive and numerous functional properties among all the carbohydrates of plant cell walls [5, 8]. They owe these useful properties due to their molecular structure. In their native form, pectins have a water-insoluble supramolecular structure called the protopectin complex. The structure is an extended and highly branched linear and lateral network of polymer fragments (Fig. 2). Lateral branches also have a complex structure and can be interconnected with salt and borate bonds [9–18]. 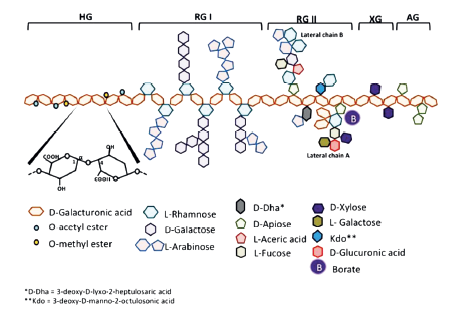 In positions C1 and C2, hydroxyl groups can form glycosidic bonds with the residues of xylose, ribose, arabinose, and galactose, as well as ester bonds with carboxylic acids and aromatic compounds. The state and total amount of carboxyl groups in the pectin molecule fragment define the physicochemical properties of pectins, while the degree and the nature of the substitution of hydroxyl groups define the inhibition degree.

The practical use of pectins depends on the chemical structure of homogalacturonans. 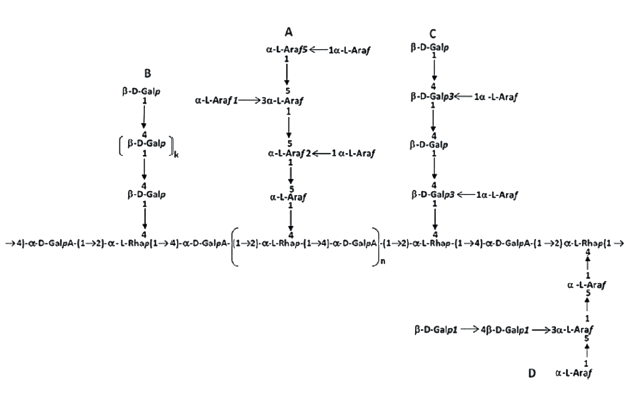 The basis of the protopectin complex of plant tissue cell walls is a network of regions formed by linear sequences of homogalacturonans and rhamnogalacturonans-I. Of course, this assumption excludes two types of lateral branches: the rhamnosilfree lateral branches (rhamnogalacturonan-II), which may contain residues of L-rhamnose and/or α-D(+)-galacturonic acid with proportion of ≤ 2–3%, and branches formed by neutral sugars and their oligo- and polymers [16, 19]. Molecular properties of homogalacturonan fragments define the physicochemical properties of plant pectin. Therefore, enzymatic fragmentation is the most effective method for the protopectin complex. It is a selective hydrolytic cleavage of rhamnosyl-uronide (1 → 2) and (1 → 4) glycosidic bonds.

Therefore, a criteria assessment would be the optimal approach to evaluate the potential efficiency of the directed enzymatic fragmentation of a particular plant protopectin complex. Such assessment can also define the boundary conditions that determine the degree of the targeted physicochemical properties of the fermentolysis products. This approach could also determine the conditions for processing any plant tissue or its derivatives. The approach consists of some stepby- step stages. The first stage was a system of criteria for assessing the transformation potential of a plant biopolymer complex [22].

As a next stage, the present research objective was to develop a system of criteria for assessing the enzymatic transformation potential of a plant biopolymer complex as in the case of pectin substances. The research included the following tasks:
– developing the abovementioned assessment criteria system, based on the use of zoned criteria space;
– developing a system of boundary conditions for the classification of plant raw materials according to the applicability of the enzymatic transformation of its protopectin complex.

The number of branching sites may also depend, to some extent, on the plant species and the functional type of the plant tissue.

Figure 5 features no fragments of rhamnogalacturonan- I as their lateral branches are represented mainly by the nonuronic component.

The ratios in Table 1 can be expressed by the following formulae:

Table 1 Particular cases of the distribution of variables that determine the structure of rhamnogalacturonan-I, at different values of br

The structure of the rhamnogalacturonan-I fragments suggests that the main structural unit is the amount of rhamnosyl residues in the branching sites. As a result, formulae (1) and (2) take the following form:

Based on the data in Table 1,

These dependences give an approximate quantitative idea of the structure of rhamnogalacturonan-I. For their practical use, they have to be linked to the real chemical composition of a particular raw material.

The line of reasoning follows the next path.

Consequently, the mass fraction of α-D(+)-galacturonic acid residues in the insoluble part of the raw material in the branching sites is:

where MGalA is the molar mass of α-D(+)-galacturonic acid residue, Da.

where ki is the polymerization degree of the i-th homogalacturonan region.

Consequently, the formula for the average molecular weight of homogalacturonan sites is as follows:

The mass fraction of the homogalacturonan component in the insoluble part can be expressed as follows:

A combination of formulae (3) and (13) gives the following result:

which makes it possible to disregard the sum of

as insignificant, in which case formula (14) can be simplified as follows:

Added to formula (12), the equation assumes the following form:

Applying formula (17) to kav makes it possible to calculate the average polymerization degree of homogalacturonan regions in the protopectin complex:

Thus, the mass fractions of galacturonide and rhamnosyl residues in the plant cell can help to determine the average polymerization degree of the homogalacturonan regions in the protopectin complex.

Let the dimentionless criterion ν is uniquely determined on the basis of chemical analysis of the native water-insoluble plant tissue component: 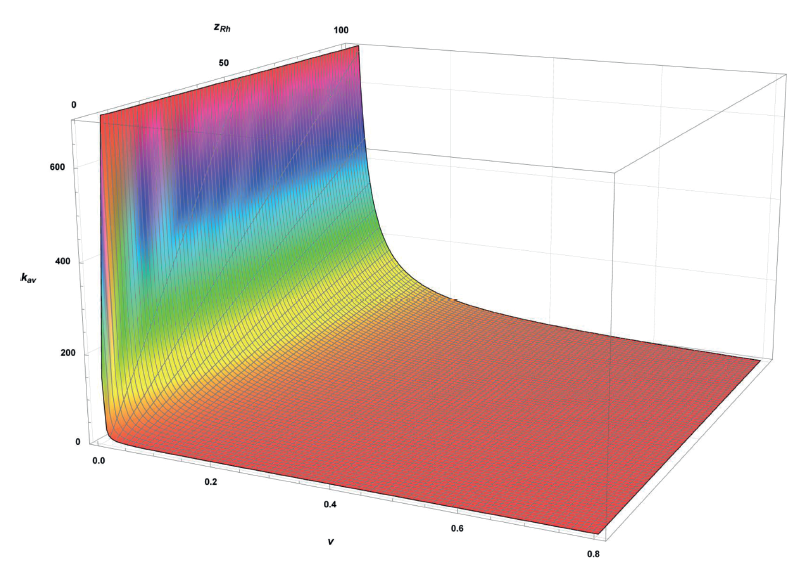 In a same time, homogalacturonan regions in the rhamnogalacturonan fraction of pectin are possible only at kav ≥ 1.

As a result, the rational condition for criterion ν is:

Provided that there are homogalacturonan regions in the rhamnogalacturonan fraction of pectin substances, the range for determining the numerical values of this criterion can be represented as

. The functional dependence can be reduced to a criterion space in coordinates ν and zRh, where kav is boundary zoning conditions (Fig. 7). 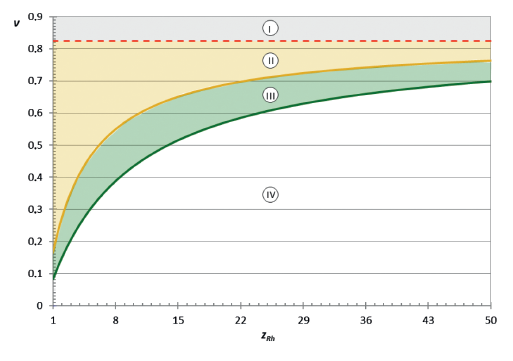 The new criteria-based approach makes it possible to unambiguously define the effectiveness of targeted enzymatic fragmentation of the plant protopectin complex within the boundary conditions that determine the degree of the targeted physicochemical properties of the final product. This approach is universal and represents the second stage of the decision tree started in [22] as a science-based technology for pectin production.

The research produced a criteria space to assess the potential effectiveness of the homoenzymatic transformation of a plant biopolymer complex as in the case of pectin substances. The method was based on a two-dimensional criteria space, zoned according to the key factor, i.e. the targeted polymerization degree of homogalacturonan fragments in the native protopectin complex.

We found that the compliance with the first criteria zone (at kav ≥ 10) determined the feasibility of using homogalacturonan-specific enzyme preparations to isolate of homogalacturonan (targeted) regions of the plant protopectin complex. The compliance with the second criteria zone (at 1 ≤ kav < 10) determined the expediency of non-enzymatic fragmentation of the protopectin complex. The compliance with the third zone (at kav < 1) meant that the fragmentation of the protopectin complex would neither increase the mass fraction of pectin substances in the medium, nor release pectins. The new criteria approach is an integral part of the technologies for obtaining pectin and its products with targeted physical and chemical properties.

The authors state that there is no conflict of interests related to the publication of this article.

The research was part of state assignment of the V.M. Gorbatov Federal Research Center for Food Systems of RAS (Russian Academy of Sciences).

Download
Contents
Abstract
Keywords
Introduction
Study objects and methods
Results and discussion
Conclusion
Conflicts of interest
Funding
References
Periodic Publications uses cookies. By continuing to use the portal, you agree to the storage and use of cookies by the portal and partner sites on your device.
Manage files